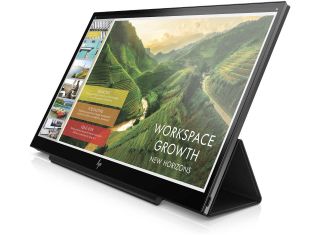 Sometimes huddling around the teacher’s notebook can be a little too close for a small group of students, while using the classroom projector might be too much. Using an external display facing the children while the teacher can see her display and the kids at once is often a strategy that’s just right.

At 2-pounds, about the size of a laptop computer and only 0.4-inches thick, HP’s $220 EliteDisplay S14 screen provides a quick and easy way to add a 14-inch external display. A must-have accessory, the S14 is an HD display with a wide 178-degree viewing angle; figure that five or six can sit around it.

The included cover protects the display’s glass surface from damage when it’s not being used. It doubles as a fold-open stand that holds the screen at a 35-degree tilt. While sturdy, it can’t be adjusted to a different angle or set up vertically. The display lacks VESA hardware for a generic stand or wall mount.

One of the easiest displays to use, forget about fumbling with HDMI or VGA cables, power adapters and crossing your fingers that it works. Just open the cover, plug the included USB-C cable into a notebook, desktop, phone or tablet and turn the display on. Unfortunately, the design precludes using a traditional HDMI or VGA cable to stream images to the S14.

Its output was a little dimmer than the notebooks I used the S14 with, but it was plenty bright enough for use in a well-lit room. To try it out, I started by using an HP EliteBook Dragonfly notebook and then used it with an Apple Macbook Air, a Samsung Galaxy Tab S4 and an Acer Chromebook Tab 10. All four systems worked like a hand in a glove with the external monitor with no noticeable delay.

It worked just as well going over geometric shapes and a timeline of history as with student photographs and online art. On the downside, the S14 refused to work with any of three USB C hubs I have, or my Lightning-plug based iPad Pro.

The display has an on/off button and fired up immediately. It showed a summary of the connection specs followed by either extending the host system’s desktop or mirroring it.

Hidden underneath are four keys for using HP’s Display Assistant software to adjust the screen’s output. It takes a little getting used to, but I was able to change the screen’s brightness, contrast and choose among nine color modes plus a custom setting with your own color balance. For me, the HP Enhance + setting worked best, with excellent brightness and color balance that closely matched the output of my Macbook Air. The good news is that the screen used 5 watts of power, so it will only slightly reduce the battery life of the host notebook.

I used the S14 to extend the notebook’s desktop to create a second screen alongside the host notebook. This allowed me to go over curriculum on one screen while working through my email or Web research on the other. It really comes into its own in mirroring mode. Here, the S14 display can be turned toward a small group of students or parents so that all can see the same images. In both cases, the teacher and her audience can maintain eye contact while both are looking at the same material.

Regardless of whether it’s used to extend a desktop or mirror a notebook’s main screen, the $220 HP EliteDisplay S14 is not only one of the easiest portable monitors to use but it’s one of the best and least expensive.