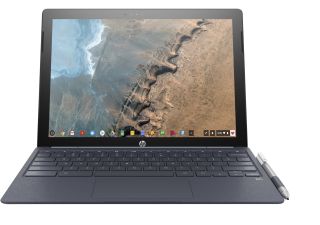 Chromebooks are everywhere in schools but for the most part they’re basic computers that don’t take advantage of the recent design revolution in mobility. Not anymore with HP’s Chromebook X2, a dual-personality system that can be a standard notebook or a stand-alone tablet, depending on the schoolwork at hand. Happily, it’s well made, powerful enough for every student or teacher and is actually fun to use.

With a removable display, the Chromebook X2 system has different digital personas for different school tasks. In other words, it can be a notebook with a hinged lid for keyboard-centric work, like writing English essays, and works just as well with the screen facing the user or away. It’s just as effective as a tablet for scribbling notes, watching an instructional video or sketching triangles for a geometry math class.

Built around a 12.3-inch touchscreen, the complete Chromebook X2 weighs in at 3.1-pounds. But, pull away the tablet portion and you have a 1.8-pound system that weighs a lot less than the 3.1-pound Dell Chromebook 3100. On the downside, it is a couple ounces heavier than Google’s Pixel Slate tablet and lacks a pull-out leg that’s used on Microsoft’s Surface Pro design.

To use the X2 as a tablet all you do is firmly lift it free of the system’s keyboard base. There’s nothing to press or unlatch; just pull the two pieces apart. When you need a traditional notebook, just bring the screen and keyboard close together and they magnetically attract each other and solidly mate.

Regardless of whether you’re using the system as a tablet or notebook, the display portion has all the connections. There are two USB-C connectors, one of which is used to charge the system, as well as a headphone jack, an on/off switch and a volume control.

The screen itself is a gem with the ability to show a stunning 2,400 by 1,600 resolution. This is a big step up from the Chromebook 3100’s wide-XGA display. Its Gorilla Glass construction means that the display is protected against accidents at school. With the ability to work with fingers and the included active stylus, the display responds quickly to 10 independent inputs. This makes it great for doodling, sketching and in-class note-taking.

The system's pen comes with an AAAA battery and the keyboard portion has a loop to make the pen harder to lose. Unfortunately, there’s no easy way to tether it the system.

With 19.3-mm keys and a 4.7-inch touchpad, the X2 is comfortable to use and its back feet give the deck a comfortable angle. It took me a little time to get used to the textured faux leather finish and the keyboard lacks backlighting for working from the glow of a classroom projector.

Powered by a 4-cell battery, the Chromebook X2 ran for 12 hours of YouTube video viewing with short hourly breaks. this should be enough power to run all school-day and have some left over for homework. By contrast, the Dell Chromebook 3100 ran for 40 minutes longer.

The Chromebook X2 12-F015nr model that I looked at is a winner for schools with a low-power Intel M3-7Y30 processor that normally runs at 1GHz but can sprint at up to 2.6GHz when needed. This makes it perfect for efficient stop and go computing in classrooms, the library or after-school work.

Inside, the X2 has 4GB of RAM and 32GB of solid-state storage that can be expanded with a micro-SD card that can hold up to 256GB. Like other Chromebooks, the X2 also includes two years’ worth of 100GB of Google online storage. This should be more than enough for everything from social studies essays and experimental videos to math homework and French projects.

Whether it’s for a parent-teacher Skype conference or shooting pictures on a field trip, the X2 has cameras aimed at the user (5MP) and away (13MP). In addition to Bang & Olufsen tuned speakers, the Chromebook has a headphone jack for quiet time.

According to Geekbench 5’s performance software, the X2 won’t let any student or teacher down. Its single- and multi-core processing test results of 653 and 1,155 are on a par with Samsung’s Chromebook Plus. On the other hand, the X2’s 708 on the Compute series of tests that mimic real-world use blew away the Chromebook Plus’s 423.

After using the Chromebook X2 for two weeks, I think it will easily fit into any school’s digital classrooms. It easily connected to a variety of WiFi networks and Bluetooth accessories, like keyboards and speakers. I created mock classroom lessons and activities with Word, Excel, PowerPoint and used a wide variety of ChromeOS school apps, including Google Docs, the Desmos Graphical Calculator, Adobe’s SketchPad and Hoopla’s ebook library and reader.

HP’s Chromebook X2 is not only more than powerful enough to meet the needs of today’s digital curriculum but has the flexibility to be exactly the computer teachers and students need. Its transformation from a notebook to a tablet and back again is effortless and quick, making the X2 seem like it’s two systems in one.

With a one-year warranty, the X2’s $530 price tag will seem steep for schools used to paying half as much for Chromebooks. On the other hand, a comparable iPad might run twice as much after you add in the keyboard and stylus, both of which are included with the X2.

Sure, the X2 costs more than other Chromebooks but it’s worth every penny for its ability to be a classroom twofer.

Can switch between tablet and notebook