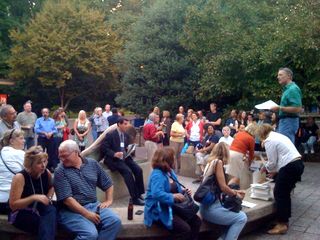 I had the great pleasure of attending the annual Intel Schools of Distinction Awards in Washington, DC this week. This was my second year attending the event, and I was once again impressed with the passion and creativity of the school finalists.

The Schools of Distinction honors schools in science that provide a rich science curriculum incorporating hands-on investigative experiences that prepare students for 21st century jobs. The Schools of Distinction honors schools in mathematics that offer their students a rigorous, challenging and engaging program that teaches mathematics skills and how to apply them to solve real-life problems, approach projects as a member of a team, and communicate succinctly on the subject.

The event began at the Renaissance Mayflower Hotel in D.C. on Monday morning, September 13, where the 18 finalists split into three rooms to give their presentations. See highlights of these presentations below:

Each school had different approaches to science and math, but there was common denominator: these programs were truly engaging students, which led to student achievement. Technology was also at the core of the programs, but it was clear that the passion of the educators at each of these schools -- from teachers to principals to superintendents to board members – were the real foundation of the school’s successes.

After the presentations, the group was divided randomly to take off on a D.C. scavenger hunt. I was grouped with a school from Kansas and another from San Antonio, and navigating our way through the city together was a great way to get to know them, from hearing stories of their families to stories of how much they loved their jobs, challenges and all. We rode the Metro, trekked past amazing historic sites like The White House and the Washington Monument, picking up clues and using our (allowed) tech to help get us to the answers. Our three-hour journey culminated at the beautiful Smithsonian Zoo, where we had a casual dinner at the small mammal house and Intel announced the scavenger hunt winners. We didn’t win, but we had a very good time.

On Tuesday, the school representatives woke early to go the Hill and meet their congressional representatives. I had the chance to interview Karen Cator, the U.S. Director of Education Technology (watch for this video interview later this week and in the October issue of Tech & Learning).

That night, the finalists and their guests gathered for a black tie dinner gala. Many of the industry names were there to celebrate: Keith Kruger of COSN, Karen Billings of SIIA, Ann Flynn of NSBA, and more. Despite some anxiety, everyone was excited and friendly, sharing good conversations with new friends about their work and passion. After dinner, Wendy Hawkins, Executive Director of the Intel Foundation, got on the stage to announce the winners. First, the audience heard from 2009 winner Max McGee:

She called the schools by grade (elementary, middle, high) and category (math, science). Each of the 18 schools receive a $5,000 award from the Intel Foundation. She then announced the winners of the "Intel Schools of Distinction" from each of these groups; these six schools won an additional $5,000 from the Intel Foundation and a package of goods and services valued at approximately $100,000. There were many hugs and genuine congratulations to all schools.

Next came the big announcement: the winner of the "Star Innovator," who received $25,000 from the Intel Foundation, and additional prizes and services from sponsors. After the proverbial drumroll, Ms. Hawkins announced the winner was Payton College Preparatory High School, Chicago, IL.

In recognition of and support for their efforts, each school won an estimated $160,000 in a combination of cash grants from the Intel Foundation and an award package including curriculum materials, professional development resources, hardware and software from program sponsors including Blackboard Collaborate, BrainwareSafari, Dell, DyKnow, I-CAN, SAS, Scantron, SMART Technologies and Tabula Digita.

[Learn more about this year's winners.]

Congratulations to all finalists for their good work and thank you for your passion. Click HERE for more information on the Intel Schools of Distinction Awards.