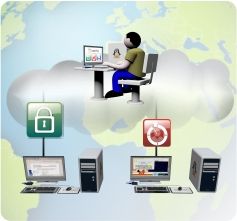 Userful Corporation, provider of Linux desktop virtualization, has released the next generation of its Userful MultiSeat™ solution which turns one Linux computer into multiple independent computer stations using the $99 HP t200 thin client.

Userful MultiSeat enables schools and businesses to deploy more than twice as many computers for the same cost, while enabling multiple users to use different applications at the same time from one host computer, each with their own monitor, keyboard, and mouse. The HP t200 provides the capability to connect multiple stations to a single host PC such as the HP ms6200 directly over USB for close proximity computing environments without the need for a LAN, or install computer stations in multiple rooms using a single host PC with each station connected over Ethernet.

A free 90 day pilot is available to qualified education administrators.