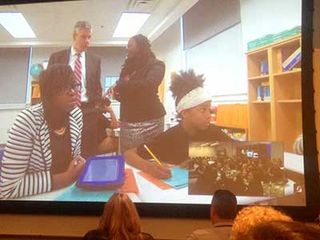 There were a number of myth busters (no, not them ) at Discovery Education’s global headquarters in Silver Spring, Md. for the company’s Future@Now conference yesterday. Approximately 2,000 participants in 40 states and countries met both in meatspace and online as they listened to district leaders like Dallas Dance from Baltimore County, Kaya Henderson from Washington DC, and Alberto Carvalho from Miami dispel some misconceptions about the failure of public education in urban centers. Dance outlined the S.T.A.T. (Students and Teachers Accessing Tomorrow) 1:1 conversion to digital learning program. Carvalho poked holes in the notion that a lack of resources should be an excuse for any district not to innovate. And Henderson celebrated higher DC student scores as evidence to combat the district’s complicated perception. You can dig into the full day’s activities, which included a virtual field trip conducted by Arne Duncan (pictured), as well as an offer for educators to beta-test the Discovery Education Math Techbook series here. Look for more details on these districts in the coming weeks. —Kevin Hogan, Editorial Director