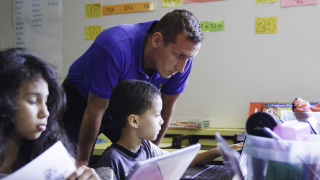 Collin Yust has been teaching second through fourth graders for over 10 years. “Put me in front of a class—math or English—and I’m comfortable jumping in,” he says. Coding, however, was another story. When Yust learned about Codelicious he knew it would be a great way to introduce a creative new element to his block periods for math, social studies, and science. He received support from his forward-thinking district to implement the curriculum in his classroom. “But I’m not tech savvy—though I’m better now—and I was a little nervous about teaching coding,” he says. So he did what any good student does—he did his homework. He taught himself to code by going through the Codelicious lessons.

“It seems daunting—but if I can do it, anyone can do it,” he says. “Codelicious is very teacher friendly, and it’s progressive and personalized, so students learn basic skills and the projects, many of which are game based, get harder.” His students particularly love the soccer game and space activities, and Yust loves that Codelicious is cross-curricular so he can integrate coding into science and other subject areas. “The kids get fired up because they can see the connections,” he says.

While increased confidence might not be the first benefit of learning to code that comes to mind, it’s an important one. “Codelicious has given some kids a chance to shine,” Yust says. “When a shy student gives a demo on the SMART Board, for example, that new confidence carries into other areas too.”

Through debugging activities, students are developing critical-thinking and problem-solving skills as well. “It’s awesome to see students have that experience of figuring something out,” he says. “It’s hard for third graders to see the big picture and think long-term, so that kind of instant gratification is great.”

Students are also connecting what they’re learning to the games they play outside school. “They think about all the coding that’s behind the scenes of the decisions characters make—and it gives them an idea of classes they might take in middle or high school and career opportunities they might want to explore.”

And, Yust says, because they love it so much, Codelicious is also a great motivator for kids to stay on task with math and other core subjects so they can get to their coding lessons and projects.

“I jumped right in and taught myself the curriculum, and that was the best preparation for teaching something entirely new,” says Yust, a self-professed history buff who never thought he’d be teaching coding. “When I made mistakes, I’d go back and figure it out. Many of those were the same mistakes that happened in the classroom, so I was prepared to help guide students. I tried to be as many lessons ahead of them as possible.”

Warren Township used some of the funding they received through Race to the Top to complete a 1:1 initiative with Chromebooks, which allowed Yust to bring in the Codelicious curriculum. Yust also uses the science money he receives each year to invest in another set of Snap Circuits. “Every year, with another set, more kids can use them more often,” he says.

Tech Used in the Classroom