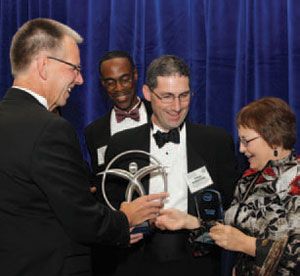 The 2010 Schools of Distinction awards ceremony was held in September at the Mayflower Renaissance Hotel in Washington, D.C. The award honors schools doing innovative work in science and math. Each of the 18 finalist schools receives a $5,000 award from the Intel Foundation. From this group, six schools are selected to receive the Intel Schools of Distinction award, winning an additional $5,000 from the foundation and a package of goods and services valued at approximately $100,000. The biggest prize went to the “Star Innovator,” which received $25,000 from the Intel Foundation and additional prizes and services from sponsors.

And the winners are:
The Star Innovator
Chicago’s Walter Payton College Preparatory School, a citywide magnet school that serves a diverse student body and focuses on mathematics, science, and world languages.