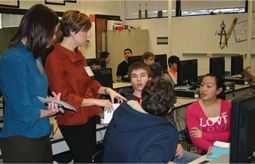 In 2009, the Web site Grant Wrangler (www.grantwrangler.com) listed more than $166 million in grants and awards for K–12 schools and the people who work in them. While some foundations did have to cut back on their amounts or get out of the grant-giving business altogether, new grantors came on board and Web site traffic continued to increase. Not too surprisingly, Grant Wrangler’s annual subscriber survey showed that 54 percent of grant seekers sought technology funding last year. Learn how four districts turned their tech wishes into reality.

WHAT THEY ARE DOING WITH THE GRANT: The goals of the district’s Technology Enabled Education through Innovative Technology (TEE IT up!) Program are to teach technology skills and teamwork and to help students learn about high-tech opportunities. The school received HP tablet PCs, printers, mobile workstations, mini notebooks, and graphing calculators. Teachers were given money to attend conferences. Students have teamed up with mentors from local companies and universities to tackle real-life problems pertaining to math, engineering, and science.

WHY THEY THINK THEY WON: Naperville had packaged the idea for an earlier grant application. The HP grant was a good fit, and the curriculum director knew that the school could act on it immediately. “We had a very thoughtful plan for what we wanted to do and how we would use the technology,” says Julie Carlsen, grants coordinator.

HOW LONG IT TOOK TO GET THE MONEY: Naperville sent in the application in April, it learned the result in May, and it received the equipment in July. The teachers also went to an HP event over the summer.

WHAT THEY’LL DO DIFFERENTLY NEXT TIME: Not much, according to Carlsen. The school had put a lot of work into the proposal and was very prepared.

WHAT THEY ARE DOING WITH THE GRANT: Improving student achievement through inquiry-based instruction. With the money, the district bought a new math curriculum as well as hands-on science modules and intervention programs. It also pays for math and science resource teachers to provide embedded professional development.

WHY THEY THINK THEY WON: Jefferson County already had a lot of the system processes in place, such as the literacy initiative “Everyone Reads,” so GE felt that the district was ready to go to implementation.

HOW LONG IT TOOK TO GET THE MONEY: Some was given immediately, and the district receives $5 million every year.

WHAT THEY’LL DO DIFFERENTLY NEXT TIME: “Our challenge, and we’re doing a fine job at it, is trying to be systemic across a large district,” says Sharon Shrout, director of instructional technology. “We must make sure that one department’s work is supporting another department, that we are staying aligned with these initiatives, and everyone is moving together to do the same work for our students.”

Warren Tech students learn to use such cutting-edge technology as tablet PCs to solve problems and develop 21st-century skills.

WHY THEY THINK THEY WON: “I think it’s because we are on the cutting edge of using technology, applying it to real life, and allowing students to access it,” says Joe Shaw, principal. “We were already doing some of this work; the grant has given us the ability to go even further.”

HOW LONG IT TOOK TO GET THE MONEY: HP awarded the grant in April 2009, and the equipment was in the building before July 1.

WHAT THEY’LL DO DIFFERENTLY NEXT TIME: The school is looking at more of the STEM piece, Shaw says. “We’re working with two STEM academies next year. We see that as a path to go down with our programs.”

GRANT & AMOUNT AWARDED: 2009 Intel Schools of Distinction Star Innovator Award; $27,500 from the Intel Foundation and $250,000 worth of additional products and services from sponsors

WHAT THEY ARE DOING WITH THE GRANT: IMSA established an innovation mini-grant program. Some of the approved faculty and staff projects are interactive software for Mandarin Chinese classes, teaching scientific inquiry at the middle school, career Webinars, advanced use of technology in wellness-learning experiences, and streamingvideo demonstrations.

WHY THEY THINK THEY WON: Intel sponsors this award to honor schools for implementing innovative mathematics and science programs and serving as models for other schools. IMSA was selected because of its comprehensive program, which incorporated innovative and effective use of technology, engaging parents and the community in students’ education, fostering professional development and teamwork, and consistently achieving high academic standards.

HOW LONG IT TOOK TO GET THE MONEY: The district received the funds right after the award ceremony, in September 2009.

WHAT THEY’LL DO DIFFERENTLY NEXT TIME: “We will continue to use our curiosities, energies, and resources to develop innovative strategies and practices in science, mathematics, and technology applications for education to apply for new grants,” says Brenda Buschbacher, coordinator of public information.

CHOOSE THE RIGHT GRANT
Don’t just go for the big money or a grant that you’ll build a program around. Pick one that is truly a match for your school.

MAKE IT MEMORABLE
Schools that win make an impression. Let them see how you will transform the school. Make it vivid; make it stand out in an authentic way. Make the judges cry if that’s what it takes.

BE A GRANT REVIEWER
If you can review grants for someone, such as the mayor’s office, you will quickly learn what makes applications stand out.

ASK AN OUTSIDER TO DO A READ-THROUGH
You can’t rely on the reviewer’s having the same level of tech knowledge as you or being able to piece together what you’re saying. One big mistake grant writers make is thinking “I explained that five pages ago, so I don’t need to say it again.” Don’t be afraid of appearing to repeat yourself; you want to be clear and thorough.

REPRESENT YOUR NEEDS ACCURATELY
In a public grant, you have to say where your failures are or you won’t seem to have a need for the money. Your goal is to look needy without looking like the black hole of neediness. Describe the need, what you have already done, and what this money will allow you to do.

START EARLY
It sounds obvious, but you have to give yourself time to bring in all the appropriate partners and consider the budget. If there are any matching requirements, you’ll need time to find the right match.

READ THE DIRECTIONS CAREFULLY
Know who has to sign off on everything before you start so you’ll know if they’ll need time to do this. Pay attention to what’s required and to who must do it. No one wants to lose because of a technicality.