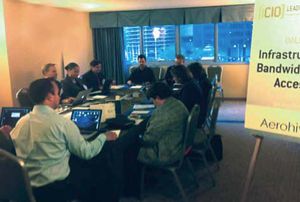 The challenges facing CIOs, IT directors, and others responsible for planning and maintaining district infrastructure continue to grow under pressure from a variety of factors. These include lower computer-to-student ratios, “Bring Your Own” implementations, increased reliance on digital content, and the prospect of highstakes online testing.

* Lower Computer-to-Student Ratios. As many schools move towards one-to-one implementations and others add new hardware to improve ratios, the need for a robust wireless network and adequate bandwidth grows.
* “Bring Your Own” Implementations. With the growing popularity of BYO, it is not uncommon for the district to be supporting more devices than people, putting an additional strain on the network.
* Increased Reliance on Digital Content. As schools move to e-textbooks and online curriculum supporting Common Core standards, always-on technology and ubiquitous device access become more essential than ever.
* The Prospect of High-Stakes Online Testing. These demands are only going to become greater as we move towards online testing such as the assessments related to Common Core state standards that will be implemented in 2014.

We have looked at our devices, bandwidth, and staff to determine if we have enough to test whole grade levels at a time. Like many other districts, I believe we will have to make a considerable investment in additional infrastructure to pull off the online testing.
—John Marcus, director of technology, Sharon, MA

Here’s some advice from SchoolCIO Summit participants for getting–and keeping–students and educators connected to the Internet.

2. Build in Redundancy. At Texas’ Klein ISD, for example, where they are piloting online, end-of-course exams on top of an extensive, oneto- one initiative, CTO Karen Fuller explains that the district has invested in two separate networks, each offering 400 MB.

3. Reassess Frequently. As Marianthe Williams, director of technology for the River Dell Regional Schools in New Jersey, explains, “We have a district commitment to keeping our infrastructure robust and ahead of where we need it to be so that it supports teaching and learning but is invisible to the end user.”

6. Prioritize the Traffic. “Strategic management through caching and bandwidth management hardware has allowed us to prioritize the traffic,” says Javier Baca, executive director of IT for the Sunnyside USD in Arizona.

7. Tap into Funding Opportunities. Lisa Young, director of technology for the Clayton County Public Schools in Georgia, says her district has been able to build infrastructure and equip classrooms with support from eRate, RTTT funding, and SPLOST revenue.

8. Lobby for Better Rates. A number of participants expressed frustration at what they saw as the unreasonably high rates their schools were being charged for Internet connectivity.

9. Look for Ways to Help With Home Access. Several district leaders reported success partnering with cable companies to spread the word about low-cost connections through the Internet Essentials or Connect2Compete programs.

Equity issues related to BYO were addressed at the June SchoolCIO Summit, with a number of administrators agreeing that a blended approach, including a mix of home and school-owned devices, may be the ideal solution. But tied in with the equity issues are questions related to standardization. Are all devices created equal? Is there a “lowest common denominator” that a school needs to agree on? How difficult is it for IT administrators to support a multitude of different devices?

Participants in the infrastructure working group at the Chicago summit were divided on the standardization question. Many BYO enthusiasts believe that it’s time to allow students to choose what technology they want to work with and that device agnosticism works well when the technology is being used primarily for Internet-based research and communication. But a number of SchoolCIO Leadership Summit attendees felt strongly that agreeing on minimum and consistent standards is essential if the BYO devices are to be used for completing required assignments and testing.

Plans for online Common Core testing in 2014, along with the benchmark testing that many districts are already embracing, raises the infrastructure bar and adds several new challenges, including:

* Anticipating Which Devices Will Work for Testing. “We are moving towards BYO in our district,” says Jean Tower, director of technology for the public schools of Northborough and Southborough, Massachusetts. “We think this will be a challenge for online testing. The tests need to work on mobile devices and on student-owned devices.”
* Additional Bandwidth and Network Demands. A number of Illinois participants referred to a recent state program, in which more than 10,000 teacher evaluators participated in assessments over a 10-week period, as a mini-test run. Some were surprised that the bandwidth held up while others reported glitches.
* Worries About Test Administration Glitches. A number of ed tech leaders at the summit shared concerns about what sorts of problems with the cloud-based CCST assessments they might encounter in their first year.
* Encroaching on Use of Technology for Instruction. Robert Miller, director of ICT for the New Canaan Schools in Connecticut, says his district has shifted testing to older computer labs while increasing the number of laptops available “to accommodate continued technology-integrated learning experiences while the online adaptive testing takes place.”
* Staffing and Support Issues. Districts that are already involved in online testing have found that technical support and monitoring can require a great deal of staff time. Craig Williams, director of information services for Illinois’ School District U-46, describes the solution that his district arrived at for the benchmark tests administered three times each year. “We brought in separate proctors with technical abilities to monitor the tests so that the building techs were free to support what was happening in the classrooms.”

The Smarter Balanced Assessment Consortium (Smarter Balanced) and the Partnership for Assessment of Readiness for College and Careers (PARCC ), the two organizations responsible for developing Common Core State Standards (CC SS) assessments, have been working together to define the minimum system requirements for the online testing that will begin in 2014.

First issued in April, 2012, and revised in June, the device guidelines for new technology purchases include a system with at least a 1 GHz processor, 1 GB RAM, 9.5 inch screen, and screen resolution of 1024 x 768. The device must be connected to the Internet, but bandwidth requirements have not been spelled out clearly at this point.

Comcast’s Internet Essentials program (www.internetessentials.com), now entering its second year, grew out of negotiations between Comcast and the FCC over Comcast’s acquisition of NBC Universal. It extends service for $9.95 per month to families of school-age children who are receiving free or reduced-price lunch.

Connect2Compete (www.connect2compete.org) is a newer program that is in the early stages of implementation by cable companies other than Comcast. It also offers service for $9.95 per month. As of now, this program is only available to families qualifying for free lunch.