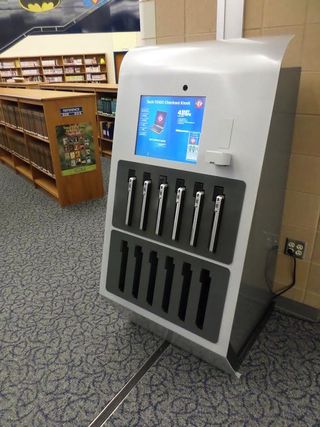 In January, Kyle Berger became the chief technology officer at Duncanville Independent School District in Texas, the district he grew up in and graduated from. We spoke with Berger about some of the incredibly exciting and innovative things he’s doing at Duncanville High School.

T&L: Tell us a little about the high school.

Kyle Berger (KB): It has 4,000 students and—at just under one million square feet—is one of the largest in physical size in the country. It’s spread out and can seem more like a junior college. As I walked around and discussed BYOD with students, I heard about many common issues, including one I hadn’t thought of before, which led me to one of our newest projects: tech vending machines.

KB: Students bring in headphones because so much of the content has audio or is interactive. With 30 kids playing stuff, there’s a lot of noise. We provided headphones because students tend to forget them fairly often, so I wanted to come up with a way to provide them easily. I thought of the vending option. When I was a kid, we had pencil machines. I thought about the other things students need and often forget, such as charging cables and flash drives. Kids would create content on their mobile device but need a way to get it off the device. Then, I was walking through an airport and saw the Best Buy vending machines and thought, ‘Why not have those in my school?’ I sent an email to every executive at Best Buy and sat back to wait. We’ve now been talking for a few months and building up to hopefully having a solution in the high school by August. I’ve surveyed students on what they would need and what they would pay so we can feed that information to Best Buy. Vending has been happening forever with Coke and Pepsi machines. Why not reach these kids how they’ve living and vend out something that will help in the classroom?

T&L: That is such a great idea. What else do you have going on?

KB: Another issue that keeps coming up with BYOD is that most students bring mobile phones, and you can do a lot with them, but sometimes you need a laptop. I’d love to put a laptop in everyone’s hands but it doesn’t make sense financially—not to mention sustaining them. I needed a way to provide a supplemental device and track it. I went back to basics and thought about how students check out library books. A librarian doesn’t have the time or desire to manage 50 laptops and keeping them charged, so I started thinking about how technology could solve this issue and came up with a plan to vend laptops. I came across LaptopsAnytime, a company that has laptop vending kiosks, and sent an introductory email. They weren’t going to sell to K-12—they wanted to sell to large public libraries. The laptop vending kiosks tie into my library system so it’s just like checking out a book. A student scans or swipes his oh her student ID and can borrow a laptop, Chromebook, iPad, etc. The student uses it for however long they need, brings it back to the kiosk, and the kiosk wipes it down and cleans the laptop. The screen asks for any issues they need to report and that’s it. We get the information in case the device isn’t working and we can set parameters like ‘Don’t vend a laptop that’s less than 75% charged.’

KB: People forget education is a big business. I have 14,000 employees—students and staff. I’m a big company. It’s an exciting adventure to go down this model. We’re placing our first machine this month. We’ll add our graphics to their kiosk and make it pretty.

It’s an exciting time to see what this will do for our students. I’m starting in the library but eventually I want to place kiosks all over the building. We’ll start with laptops but expand to provide Chromebooks and iPads. It’s a personal choice; how do you want to learn? Maybe they need a certain device for one project and a different device for another.

T&L: What does this laptop kiosk cost?

KB: The base unit is around $25,000, depending on how many devices you want to vend and if it’s a device they’ve already worked with.

T&L: Have you had any opposition to the kiosks?

KB: People are scared that students will run away with the laptop, but the kiosk records on video the person who’s vending it. We also have anti-theft software that tracks the laptop. If it gets taken, I’ll find it. Don’t underestimate the students. They take pride in ownership and want to learn this way.

T&L: When we emailed, you mentioned another cool project you’re doing that’s modeled after Penn State’s one button production studio for coloration and presentations.

KB: I was floored when I saw what Penn State is doing and thought, ‘We need this to get students to create content.’ Many times they don’t know how to edit video or what to do with speeches they record. Now you can walk in, push a button, insert a flash drive, and the camera and lights come on and you do your presentation. You hit a button when you’re done and it’s on your flash drive. With one step teachers can easily capture a lesson. We’re building this system to transform our library into a true media center.