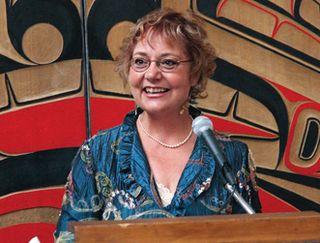 Getting High Tech on the Range

While you might expect school buses filled with pupils on daily two-hour round-trip commutes to resemble a scene from Lord of the Flies, Superintendent Patricia D. Miller’s students are too tuned in to their Zunes to get up to much mischief. After scoring an initial donation of 45 of the Wi-Fi– enabled handheld MP3, audio, and video players, Fort Sumner Municipal Schools landed other competitive grants that together put one of the devices in each middle and high schooler’s hands. Lessons broadcast via podcasts and video let teachers creatively reclaim what is normally lost study time through devices not too cool for school and simply perfect for the ride there

In a county-wide school system that covers 2,345 square miles, Miller took on a big job and has had a big success. An average of 90 percent of Fort Sumner high-school grads go on to postsecondary education, an achievement that is even more impressive considering that area families’ incomes are 20 percent below the state average.

Sowing the seeds of knowledge through agriculturally slanted programs makes sense in a New Mexico county where farm gate receipts (sales of raw goods) account for 99.5 percent of all income. Vocationalagriculture “Zunies” turn their PowerPoints, designed to help them prepare for judged agri-competitions, into video podcasts that enable them to study soil, seed, and meat samples while on school trips.

Another program turned an unused commercial greenhouse into an instructional K–12 horticulture space, while opening a commercial storefront on Main Street allows students to run a business and sell their classroom-grown products. “Elementary students were most interested in the growing aspect,” says Miller. “An established summer ‘junior gardener’ program gave them more opportunities in the greenhouse. High-school students, captivated by the business aspect of running a downtown storefront, developed ideas for projects to bring people into the store.”

So involved is Miller that the sight of students leaning against the building late into the night, borrowing the wireless within, inspired her team to secure grants and community support to create The Fort, a complete outdoor classroom that uses twisttimer lights, exterior weatherproof power outlets, and patio furniture, so that students can use the technology at night in a safe, well-lit area.

Sharing and Scoring for Dollars

Thirty-eight years in the classroom has taught Richard Whittaker the importance of sharing. He consistently takes lessons he’s learned through his own success in the classroom to a broader audience within his school, his district, and even state-wide through conferences. Similarly, after purchasing a SMART Board and projector for his classroom out of his own pocket four years ago, he didn’t stop until he helped find funding to put one in every classroom in the building.

After scoring grants for microscopes, a microscope video camera that enables students to create time-lapse video of specimens, and the Discovery Streaming video program, he again instructed other teachers in how to engender an enthusiastic response in their students. Two of Whittaker’s students addressed the topic of overfishing in the world’s oceans. One student became interested in cryptozoology and created a movie that examined the evidence of the existence of Bigfoot (and narrated by Valley Girls). “We have had movies made on the detriments of junk food, on climate change, ocean pollution, and microorganisms,” says Whittaker.

One of his most popular grantfunded projects was the addition of iPods to the classroom. Videos concerning the week’s lessons, The Wild Classroom’s Ecogeeks video podcasts, National Geographic’s Wild Chronicles podcasts, studentproduced movies, audiobooks, quizzes, and the Hubble telescope’s podcasts are just some of the material that is downloaded on the iPods. “It isn’t that they become competitive so much as they become more productive,” says Whittaker. “They support each other’s work and are always striving to improve their own work.”

After using the iPods for about four months, his students scored 100 percent in reading, 97 percent in math, and 97 percent in language arts on standardized tests. The school’s impressive 96 percent attendance rate shows that integration of tech is working.

With colleagues in New York City and across the country, Paul Allison developed a schoolbased social network for students called Youth Voices, in which students and their teachers share, distribute, and discuss digital work, images, audio, and video.

“Students seem to enjoy the opportunity to have authentic dialogue with peers,” says Allison. “Youth Voices gives students a place to develop a niche of followers, to become known through their work.”

For the past four years, Allison has also been producing, editing, webcasting, and podcasting a weekly show called Teachers Teaching Teachers, which started as a way for teachers whose students use Youth Voices to stay in touch with one another and exchange ideas. Recognizing the universal value in the content that resulted from such chats, Allison’s team went public with their private conversations.

“The show’s success comes from our motto: Keep it real,” says Allison. “We always ask each other and our guests to ‘paint a picture’ for us, ‘describe what it looks like on Monday morning.’”

Allison believes in building a greater community of teachers to share resources most effectively. He works with the National Writing Project, the New York City Writing Project, EdTechTalk, and World Bridges, as well as the East-West School of International Studies.

Speaking about the special considerations involved in working in such a large district, Allison says, “I’ve received nothing but support from the district; but the success really comes from grassroots efforts: teachers working with teachers. What’s so wonderful about being in New York City is that so many teachers of various talents are interested in connecting to best meet the needs of their students. The New York City Writing Project has been a great umbrella in making those connections possible.”

Through the New York City Writing Project, Allison has been the New York City DOE’s tech liaison for the past ten years, teaching other teachers at summer institutes that integrate tech and writing, helping run technology retreats throughout the year, and leading a “Tech Thursdays” teacher study group. Acting as facilitator with national summer institute Technology Matters and more recently Digital IS, a MacArthur-supported project, allows him to further expand his network of contacts and resources within the writing and tech worlds.

When called on to develop a model for a new magnet elementary school, Cary Petersen jumped at the chance to focus on tech. He based the concept on science, technology, engineering, and mathematics (STEM) to reinforce these classroom elements and create a practical foundation for STEM middle schools and high schools. “We have seven complete 21stcentury classrooms employing technology practical in any classroom but rarely affordable. Add to that the introduction of robotics, and students want that technology,” says Petersen.

So do teachers, as is evidenced by summer- tech-class enrollment rates, which skyrocketed (from fewer than 600 seats in 2005 to 2,500 in 2009) after teachers saw strong student achievement. Winning a grant to use the technology magnet as the elementary-teacher-training venue for the district added value to the project.

A two-year instructional device upgrade (IDU) was built into the budget. Many wanted to reduce costs by restricting each teacher to a desktop PC and a slate tablet, but the downsides to this idea were that teachers couldn’t bring the computers home to get comfortable with them and the loss of pen capabilities could hamper the success of the project.

“We believe the Tablet to be the best instructional tool,” says Petersen. “In math, the teachers use different backgrounds, like chart paper to chart or graph easily. The lines are also straight and more accurate. One of the big features of the Tablet software is the Ink Flash Cards. Teachers can run them on a timer, and they will flash on the screen at the speed set by the teachers.

“Having all the tools together in one device provides a teacher with the basics of an intelligent whiteboard for about $300,” he adds, “but we had to be creative throughout the project.”

One cost-cutting measure came in the form of using an installation team of 10 to 12 student interns. At an install rate of one school per day, approximately 90 to 120 computers per school, 14,000 new student computers were installed over two summers. Computer bags printed with the district logo helped identify the teachers involved in the project, bringing them recognition when they attended meetings with their Tablet PCs, creating a sense of pride, and increasing teacher buy-in.