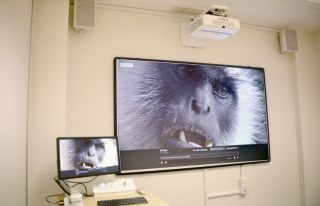 Perusing educator message boards and lists of award-winning ed tech projectors, there is plenty of chatter about short throw versus long, with many model names featuring an “ST”, “LT” or “UST” designation. What does it mean for your classroom?

The Long and Short of It

When discussing the throw capabilities of a projector, the “short vs long” code is referring to the amount of distance you’ll need to “throw” an image between the projector itself and the screen to get the display size you desire. Regardless of brand, these are categorized by how much distance the projector needs from the screen to create a 100″ image.

Long throw projectors can require six feet or more of available space between the placement of the projector and where the screen is mounted. Long throw lenses are generally less expensive due to the quality of glass in the lens and work well for large halls, auditoriums or exhibition spaces. Short throw projector lenses can create a much larger picture from about four feet or less, so are better suited for small spaces such as individual classrooms. Ultra short throw options offer the ability to mount or place the tech even closer to the viewing area, using extreme projection angles to lower the distance to inches versus feet.

The advantage of short or ultra-short throw projectors is that the teachers can position the projector closer to the screen, drastically reducing shadow interference. While this may cut down on the joy of the finger-shadow puppet dogs and bunnies cavorting across the screen or whiteboard, it allows educators to engage students from the front of the class. This face-to-face angle better enables to gauge interest and connect with little ones who have questions or who might be finding challenges in following along with the material.

Another benefit, of particular interest to those doing the teaching or presenting, is the light factor. With long throw projectors, the image source creates a light beam which directly shines on teachers’ faces as they teach. More than a mild visual nuisance, it can reduce visibility of the classroom for the one who needs it most. Much as actors on a stage have only a vague glimmer of the shifting audience before them, educators’ vision could be hampered. While this could result in minor lapses like a few extra notes being passed during class (or more likely texts, snaps or ‘grams being snuck), the bigger loss is in the eye contact and visual verification that the classes and individual students are still “with you”. For students presenting projects to the class, this takes away from experiencing the natural give and take of the moment and makes Q&A sessions particularly challenging.

While short throw options might add a little more to the bottom line than their longer counterparts, they can actually offer value and savings. If interactive whiteboards didn’t make the budget cut, using a short throw interactive projector can turn any wall, table or flat surface — “smart”.  Students can touch the surface with their finger or a special pen, and it responds just like a finger touch on a phone, tablet or other touch-screen device. Many interactive projectors recognize multiple contact points, letting as many as 20 students work together on group projects — whether tracing the path of settlers across America, finding all the “a’s” or “o’s” in the page of a projected picture book or competing in educational quiz games.