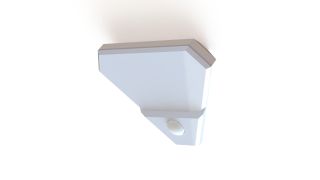 “The Safe Zone system responds within ten seconds to an active shooter situation, analyzing the on-the-ground situation and automatically communicating with all key personnel, from first responders to school administrators to parents and management,” Safe Zone President Mike Anderson said.

Designed and manufactured in the United States, and priced at $149.00 per unit, the Safe Zone Gunfire Detector combines infrared and sound detection technologies with immediate cloud-based data analysis.

By utilizing the data from multiple detectors simultaneously, the system determines the location of shots fired, the number of shots, and the type and caliber of gun being used. Within ten seconds of the trigger pull, an alert is sent to Public Safety Access Points in the appropriate dispatch center.

The Safe Zone Gunfire Detector is a small (less than 3” x 3”) triangular unit that mounts in a ceiling corner and provides gunfire detection for an area of up to 9,000 ft3.

Each detector monitors ambient noise and infrared level, with a full second of data recorded around any instance of a sudden increase in noise or light level. If an Infrared flash or sound more than 10 dB louder than ambient noise is detected, all detectors in range send the captured acoustic and IR signals to Safe Zone’s cloud-based machine learning system where they are compared against a database of thousands of signatures of known firearms and other non-firearm disturbances. The system analyzes more than 3000 datapoints in each record. False alarms like car backfires, firecrackers or balloons popping are filtered out through their distinct acoustic signatures.

For more information, contact Mike Anderson directly at mike.anderson@SafeZoneTech.com or visit the company at the Stampede CES exhibit at Booth #25708 in South Hall 2.