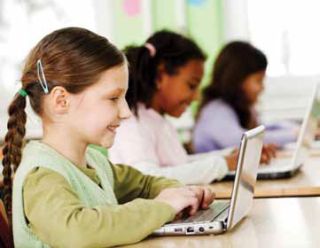 • Ninety-one percent of teachers surveyed reported having access to computers in their classrooms, but only one-in-five (22 percent) said they have the right level of technology.
• Nearly two-thirds (63 percent) of teachers cited budget as the biggest barrier to accessing tech in the classroom.
• Thirty-eight percent vs. 14 percent cited high levels of parental support and 38 percent vs. 21 percent for school board support.
• While the vast majority of teachers have access to computers, less than two-thirds (59 percent) have access to an interactive whiteboard.
• Teachers in affluent districts are twice as likely to have access to tablets as teachers in middle and lower income districts.
• Ninety-three percent of teachers believe that interactive whiteboards enrich classroom education and 81 percent feel the same way about tablets.