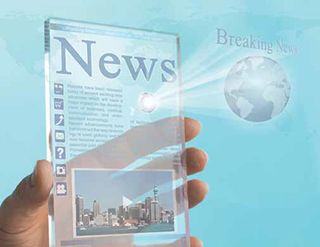 • Many Mini-tablets (otherwise known as the 7” tablet wars).
• Augmented Reality.
• Motion-sensored learning—taking a tool like the Xbox Kinnect concept and expanding on it—though I suspected this might be more likely in 2015.
• MOOCs and other open-source LMS portals like Instructure’s Canvas.
• Decrease in apps for specific devices and increase in ubiquitous online apps for any device. In reviewing this list one year later, here’s how I’ve seen my predictions play out over the school year:

1. Mini-tablets everywhere (otherwise known as the 7” tablet wars)
Results: Not even close

A better prediction would have been iPads vs. Chromebooks, which seems to have really heated up. The Windows 8 experiment is still in the early stages, with mixed reviews and only a handful of districts on board. I see no truth to the rumor that next year will be the start of the “cool phone-watch thingy wars” between Samsung and Apple.

2. MOOCs and other open-source LMS portals will take over.
Results: Not so much

While this is still in the early stages, MOOCs have gone a few rounds with the higher ed folks saying there isn’t “real learning” taking place and that they water down online education. Similarly, there hasn’t been the one single open-source LMS out there that does it all—at least not one that districts are completely on board with.

With apps like Aurasma and Layar really going mainstream in education, the AR movement is alive and well. I purchased a Leap Motion controller this summer and it seems to have some early functions when it comes to using motion with design. Apps continue to grow, and now there is an increasing trend in device-agnostic, Web-based apps making their way into education. (which should add further heat to the iPad vs Chromebook wars).

So there you go—enjoy. And if you know a professor who could teach a Meme class or think of a better phrase for “21st century skills,” please let me know. Happy New Year!

Carl Hooker, Director for Instructional Technology in the Eanes ISD, will be sharing his visions for the future of edtech at his Atlanta Tech Forum keynote speech on Friday, March 28, 2014.