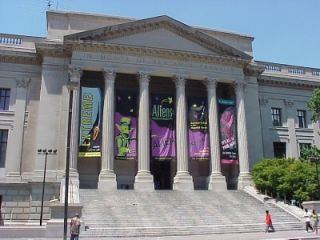 When I entered the Science Leadership Academy in center city Philadelphia, I was immediately struck by the energy. Teens bustled around informally, and one polite young man came up and guided me to the office, where, along with our editorial director Kevin Hogan, we met with the enthusiastic development coordinator, Jon Amsterdam. Jon gave us the brief history of the school -- which is not actually science-based, but an inquiry-driven, project-based high school focused on 21st century learning that opened its doors on September 7, 2006.

The Science Leadership Academy is a partnership high school between the School District of Philadelphia and The Franklin Institute (shown here). The Academy uses Moodle and writes its own curriculum, which includes art, theater, reading, and, of course, science. Each Wednesday, the students attend internships at the nearby Franklin Institute and other area businesses, while the staff stays behind to discuss how they can best collaborate on their curricula to help kids get the most of their learning. Amsterdam says these students, for example, don't just memorize facts about historic wars, they gain a more thorough understanding of what war means by examining the larger factors of what takes countries into war (economy, religion, etc.). He feels this helps them better comprehend their world today, where they can have better knowledge of what it means to be in Iraq and Afghanistan.

Another surprising fact about this science academy focused on 21st century skills: I didn't see much technology in the classrooms, libraries, or labs (see videos). That's because the students carried the 21st century with them at all times through the 1:1 program. The Academy, Amsterdam says, has moved beyond "why laptops" and now focuses on how technology can be integrated into pedagocially-sound curricula that matches their inquiry-driven, project-based approach to education.

After a tour of the school, where we encountered many other friendly, mature students, we met with Principal Chris Lehmann, who Amsterdam credits with many of the Academy's cutting-edge approaches to teaching, along with Technology Coorindator (and Digital Arts teacher) Marcie Hull. Lehmann will be coordinating the review process of all hardware and presentation toos for Tech & Learning's Awards of Excellence -- enabling us to offer this category for the first time this year.

SLA will be admitting another group of freshment next year (more than 850 students interviewed for just 120 openings), and the inaugural freshmen class of 2006 will now move into their senior year, becoming the first seniors at the school. The school just completed their first state PSSAs this past week, so the proof (at least as far as state test scores are concerned) will come to light soon. Stay tuned. -- Christine Weiser, Managing Editor

VIDEOS FROM THE TOUR

Library (click HERE if you can't see this video). Because of the 1:1 program, the library doesn't need to clutter shelves with outdated encyclopedias -- and can save library dollars for books specific to collaborative projects.