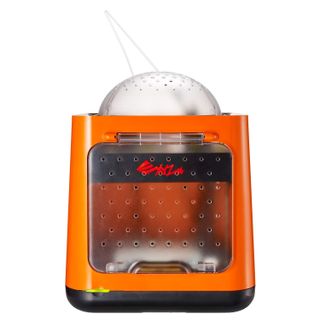 XYZprinting produces a wide range of 3D printers, but the company seems especially adept at making printers aimed at novices and newcomers. The da Vinci Nano, XYZ’s entry-level printer released in 2018, is a prime example of that. Priced at $179.99, this simple printer offers a lot of features for a small price, and it’s our pick for the best 3D printer for beginners.

The da Vinci Nano, which measures 14.9 x 14 x 11 inches, looks more like a kitchen appliance than something high-tech; it’s like a cross between a bread maker and a 1970s sci-fi movie prop. Though a front door blocks off the moving and hot parts of the printer, there is no override. If you open the front door, the printer keeps going, so it isn’t suitable for unsupervised use by younger printers.

The door does help block off much of the noise of printing, though—a low whirring and buzzing sound that is quieter than that from most printers.

Behind the lift-up front door is the print area, with a glass print bed that allows for prints of up to 4.7 inches on each side. That’s not as big as the prints possible from printers like the Dremel Digilab 3D40, but it’s big enough for most uses.

For the full exhaustive review and for purchasing links and suggestions, go to tomsguide.com and search on the product name.