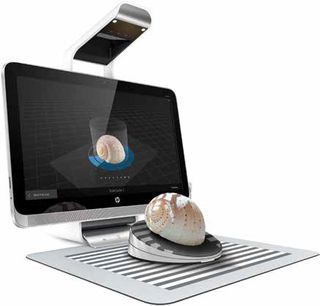 In November 2014, HP introduced Sprout, calling it an immersive computer. Seven months later, in June of this year, HP released 3D Capture, which adds the ability to capture physical objects in 3D. Sprout is the first fully integrated desktop scanning solution. It allows users to scan 2D and 3D images and then manipulate and edit them on the 10-point touchscreen computer or on the HP 20-point Touch Mat.

Adding Sprout to a 3D printing environment opens up a whole world of possibilities for student creativity. With Sprout, students are able to scan physical objects and embed them in what they are doing digitally, which allows for more immediate prototyping of new objects that can be added to existing ones. (Want to build an accessory to house those pesky wires? Scan the wires to ensure a perfect fit!) The capacity to blend existing digital content with physical objects opens the door for creativity and innovation in new ways. Sprout and 3D Capture also allow for real-time virtual collaboration in the 3D platform, so students can work with each other and with experts who aren’t in the same room—or even in the same country. Once files are generated, they can be saved as .obj or .stl and downloaded for local printing or sent to Sculpteo, a 3D print service that produces and ships high-quality prints in a multitude of materials.

Sprout, an advanced, all-in-one desktop computer, is a fully functioning, high-powered, stand-alone workstation, and it can be used for creative activities beyond 3D prototyping and printing, including stop-motion animation with Sprout Stop Motion, 4D applications with Crayola Color Alive, and the Ideum Origami Apprentice (which guides users through the creation of origami models).

3D Capture: Sprout captures 2D and 3D images using the HP Illuminator, powered by the HP DLP projector, the HP high-resolution camera with up to 14.6 megapixel resolution, and the Intel RealSense 3D camera and an LED desk lamp. The available Capture Stage (a separate purchase) has a turntable and automatically tilts 15 degrees while turning, which helps ensure that all aspects of the object being scanned are captured. The stage is not required for 3D scanning.

3D Capture and Manipulation: The 3D Capture application allows users to scan and manipulate objects using the included HP Touch Mat, which is a 20” diagonal, 20-point touch mat with ultra-resistant top coating and Adonit Jot Pro stylus. Additionally, users are able to share 3D objects with others via email, Facebook, and other social media sites, in an online viewer where they can collaborate on and manipulate the objects.

3D Printing: HP is currently partnered with Dremel to create an integrated printing solution with the Dremel 3D Idea Builder (which can be purchased as a bundle) and is aligning with Sculpteo, a print service, to offer 3D print delivery by mail.