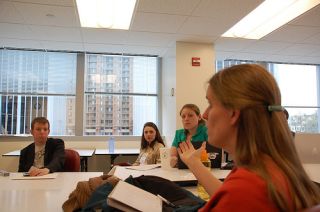 Around a year ago I wrote an article entitled 8 Observations on flipping the classroom, in which I put forward the reasons I thought it not a great idea. I still stand by those arguments, although my attitude towards flipping the classroom as a general idea has mellowed somewhat. Let me explain.

My understanding of flipping the classroom, as originally conceived and still talked about as far as I can see, is that it’s a situation in which the teacher records his or her “lectures” so that their students can watch them out of lesson time, freeing up time in the classroom for discussion, interaction between teacher and student, peer learning etc etc etc. Read the article I just referred to for the reasons I think the whole idea is ridiculous, despite the fact that some clearly very clever people have managed to make it work.

My main arguments against it are that:

I could go on.

However, if we broaden the concept of flipping the classroom to encompass more than video lectures, it all makes perfect sense. Basically, the idea is that you give your students something to do between this lesson and the next, so that they will be better able in the next lesson to take an active part in it, through discussion, suggestion-making, assessing their peers’ work, and so on. Put like that, it’s pretty amazing isn’t it? I mean, it must make perfect sense, because that’s exactly what good teachers have been doing for eons.Pardon my sarcasm, which I know is unbecoming a gentleman, but really!

If you forget about video lectures for a moment, what else is possible?