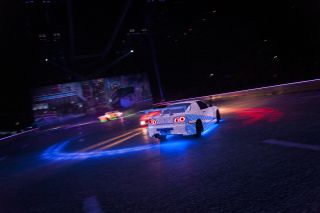 The innovative BlackTrax real-time motion tracking system was instrumental in bringing the thrills of the Fast & Furiousmovie to live events in the UK and Switzerland, with further shows planned for the Czech Republic, Denmark, France and Germany.

According to the official web site, Fast & Furious Liveuses the most advanced technology and fans’ favourite cars from the series to faithfully evoke the most outrageous moments and iconic stunts from the series. Recreating the underground streets of Los Angeles to locations that criss-cross the globe,Fast & Furious Livelets fans relive the most extreme action as precision performance drivers execute pulse-pounding stunts surrounded by blockbuster set design, authentic digital projections and state-of-the-art physical obstacles.

Kate Dawkins Studio (https://katedawkinsstudio.com), already with a great pedigree for creating content for spectacular live shows, was responsible for the creative art direction. She laid out the vision for the show’s projection content which heavily referenced the films, but took on a more stylised, graphical, game like aesthetic for this stadium environment. Kate Dawkins explained “It was great to add a layer of real-time effects to enhance the content.”

The projection mapping, a key factor of this show, allowed the creative partnership to create ever- changing environments from a neon-lit downtown Tokyo to a street scene at night in Miami. These living sequences interact directly with the live action and stunts to create a dynamic, fast paced and awe-inspiring show.

Pre-designed, projection-mapped sequences interact directly with the live action and feedback on the exact position of the cars and presenters at any given time to the audiovisual effects and lighting system helped deliver a wholly immersive experience for the audience. This was the role that the BlackTrax motion tracking system fulfilled.

“There are magical things you can do in creating a movie that are almost impossible to recreate for a live event – and that was our challenge with Fast & Furious Live, so that fans would find it no less awe-inspiring and exciting,” said Andrew Gordon, BlackTrax’s Director of Business Development. “To achieve that level of fan engagement, there is no room for any potentially distracting error in a fast-paced and potentially unpredictable show – and that’s what BlackTrax achieves to perfection.”

BlackTrax is rapidly becoming an industry standard for controlling projectors, cameras, robotic lights, media, audio and other equipment and applications that support the RTTrPM open protocol. It is a vision-based system and has been deployed in over 8,000 shows globally from the recent Queen + Adam Lambert tour through Cirque du Soleil and the Eurovision Song Contest to major product launches and opening ceremonies.

The original Fast & Furious movie was first shown in 2001, with numerous sequels having been released since then. It is said to be the sixth-highest grossing film series of all time with a combined gross of $5 billion, and is Universal Studios’ biggest franchise.