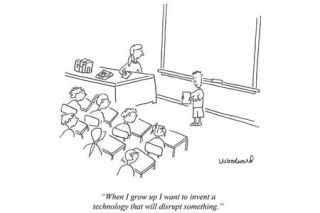 I met Melissa Killion at an EdCamp session on the Flipped Classroom two years ago. Afterward, we talked for a while about our experiences on what had been working and what hadn’t in our classrooms. We’ve kept in touch ever since. A couple months ago, I went to Melissa’s school as part of our state’s new innovation initiative. I snuck away from the pack to go visit Melissa and got to see her amazing blended classroom in action. As an iPad school, she had been using Explain Everything to make her videos. I’ve been using Explain Everything for years, and I showed her a neat trick where you can put a video inside of a video. I didn’t think anything of it and until Melissa reached out on Twitter and showed me the amazing way that she had used my trick. I was blown away by what Melissa did and asked her to share it here as an example of transforming the learning experience for a student using edtech. She did one better and included not only her own words, but also asked her student, Anna, and her sign language interpreter to share as well. Check this out!

There are many things we take for granted, such as cell phones, wifi, and electricity, but when was the last time you thought about your ability to see, hear, taste or touch? My senses are not something I typically though about until I had Anna, a deaf student with a cochlear implant, in my Math class.

My co-teacher and I run a blended-style flipped classroom. Sometimes we video the instruction during the lesson for students to refer back to, while other times we create the videos ahead of time and have students watch them at home.

Anna is an extremely independent young woman and does not allow her disability to rule her life by any means. Therefore, I wasn’t surprised when we learned just a few weeks ago that Anna has been unable to hear the videos properly through her cochlear implant. Needless to say my heart dropped. Our videos were taking time out of her study skills period, which was never our intention, since she had to wait until then for her interpreter to sign the videos for her. We wanted Anna to be able to do what all of the other students have the privilege of doing: watching the videos on their own time, in the comfort of their own home.

Anna asked if there was a way that we could play the video and simultaneously have the interpreter sign. Thanks to EdTech we were able to make this possible. Once again, we were able to level the playing field for all of our students. Thanks to my district’s 1:1 iPad initiative, the sharing capabilities of Google Drive and a special trick from a friend , Chris Aviles, we were able to meet her needs. Before the end of the school day, the student had a video that she was able to watch at home just like her peers. With a little preparation and communication among the support staff, Anna will have all of her videos interpreted and available for her viewing pleasure at the same time as her peers. Educational technology has made all of this possible; we were able to make education more accessible and allow everyone the same opportunity to learn.

I have been an Educational Sign Language Interpreter for ten years now. Even though I have experienced pre-k through twelfth grade, I feel like I am learning something new each and every day; some days bring greater challenges than others. This year I was faced a brand new challenge: iPads everywhere. I have to admit to see the student’s whiz through them was rather intimidating at first! Questions of course came to my mind right away, is there a sign for that? How can I visually show what is on the screen? This is great and all, but is it completely accessible for my student? Sure, I know how to turn one on and do basic things on them but I never knew its potential; it’s really been an eye opener for me.

I have been lucky enough to work with two teachers who have extensive knowledge of the iPad and use it every day in the classroom. Whether it be the warm-up, the lesson for the day, a recorded lesson, complete homework, you name it, it’s on the iPad. For Anna, it is extremely accessible until a recorded lesson is assigned and notes must be taken. Even though the lesson itself is very visual, she isn’t able to pick up on everything being said, some key points. This is where an extra step needs to be added in for her to completely comprehend the information. She isn’t able to do the lesson for homework instead waits until the next day for me to interpret the lesson for her during her study skills period or go into the hall during her math period. This isn’t a huge deal, but it sometimes does take away from her other work. One day while we were sitting in the hall she mentioned how awesome it would be for an interpreter box to be in the bottom of the screen while the lesson was going on. I loved the idea and the fact that she was advocating for herself! I jumped on it and knew it had to be possible! I spoke with the teachers and because of the app they are using, “Explain Everything,” they knew it was possible we just had to figure some things out. By the end of that day my student was able to go home, watch the lesson, and take her own notes. To some this means absolutely nothing, but to her the world! Anna is a very independent young women and this was able to empower her just a bit more.

With a little collaborative effort between the teachers and myself using Google Drive the videos are now ready for her to view as soon as they are assigned. The video is recorded on the teachers end, put into Google Drive and shared with me. From there I am able to pull up the lesson, add another video into the bottom of the screen, interpret, and record. The extra step is taken out for my student and I must say it’s a beautiful thing. This is huge for deaf students and I am excited to see where it goes!

In my math class, I became frustrated when I was assigned to watch a video that summarized what we learned in class that day because I could not hear due to my cochlear implant. So when my math teachers would assign videos, I would have to go into the hall so she could interpret it for me. One day, while my sign language interpreter and I were sitting in the hall so she could interpret a video for me, I commented that it would be cool if there could be an interpreter box in the video. She thought it would be really beneficial as well and asked my in class support teacher and my math teachers if it was possible. They felt that there could be a possible way to add another box to record my interpreter. Somehow, they figured out how to make it work and my interpreter was able to interpret the new lesson the next day.

Now, when I get home I don’t struggle as much as I did before when videos were assigned and I don’t have to wait until I get into school. Now, I am able to watch the video at my leisure like all of the other kids in my class. I don’t have to wait until the next day for my interpreter to interpret the video. I appreciate my interpreter and teachers for investigating how to make this possible!

Life is a funny thing. I’m happy I just so happened to be at Melissa’s school and showed her a trick that would be used in such a meaningful way. It’s weird how things like that happen.

Sometimes a little EdTech can make a big difference!

Here’s an example of a video Melissa and her interpreter created for Anna:

Here’s how to put video in video (interpreter box) in Explain Everything: