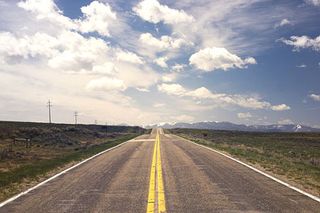 Do you ever have that moment where there is something you have to do, but you don’t want to do it? Maybe it’s just a menial task like putting away laundry or doing the dishes. In your job it may be something like entering grades or uploading data via .csv files. Those moments happen throughout life unless you are lucky enough to have a butler and not have to work.

But what about those times when there is something you have to do that troubles you because you know it pushes you out of your comfort zone?

Now I’ll stop here and say that the phrase “have to do” would really be more apropos if replaced with “should do.” It’s those uncomfortable moments when you have an opportunity to do something that has some potential benefit, but because it pushes your comfort zone a bit, you decide not to do it. You end up circling back later usually with some regret, expressing how you should have done whatever it was. You end up “should-ing” yourself out of doing things. (Great video here detailing this concept)

A couple of weeks ago my wife and I got to travel to Australia to present and MC the amazing iPadpaloozaGC event taking place there. We decided to make a mini-vacation out of it as I was taking time off to travel anyway and go up a few days early. After traveling 26 hours, we landed in Gold Coast with really only 2 and 1/2 days to explore, the 1/2 day being the Sunday we landed.

My wife had done some research and discovered a place called “O’Reilly’s Rainforest Retreat” which had a great viewing platform that over-looked the rainforest. The only problem was, it was too far for an Uber ride so we had to rent a car. Now, as you may know, in Australia they drive on the left side of the road with the car seat in the right side of the car. We decided rental was the way to go and as we landed I noticed something strange….I was nervous.

I say strange, because nervousness is not usually a trait I possess. Even before public speaking, you can often find me laughing and dancing off-stage (probably as a way to combat the onset of nervousness mind you). My hands were clammy, my stomach began to ache, and I began to imagine that scene in European Vacation where Chevy Chase is running into everyone in the parking lot as he learns to drive.

I began to frantically look at the cost of an Uber ride. It would be about $300 round-trip, but that cost might be worth it if for no other reason than to overcome the anxiety I was now experiencing. Without really thinking though, we walked up to rental counter to “hire a car” as they say it down under. And so, despite being exhausted and jetlagged, I found myself behind the right side of a car driving on the wrong side of the road. We were off.

We picked up our friends, Scott and Lisa on the way up to O’Reilly’s to share in the horror/experience of me learning to drive all over again at the age of 41. Of course, being a male, I had to hide my fear, but anyone looking at my knuckles on the steering wheel would have noticed they were stark white. As we traveled up the mountain the road began to get narrower and narrower. Eventually, it turned into a one-lane, two-way road that didn’t have any guard rails and a deadly cliff on one side. Here’s a little time-lapse of what that looked like from the passenger seat on the left side:

Needless to say, I was now completely terrified. Every time a car was traveling down the road, I would have to pull off onto a non-existent shoulder with the car teetering on the edge. My wife would dig her nails into my leg as she had a bird’s eye view on what would be our eventual demise. At some point on the drive (which lasted about 45 minutes), I began to have a sense of euphoria overtake me. Had we died and I didn’t notice? Was this what adrenaline junkies refer to as an adrenaline high?

This euphoria I was experiencing was from learning something new. That change and discomfort I was feeling went hand in hand with learning something new. Now, I know this isn’t a break-through in science as many blogs and articles have discussed how you can grow through discomfort, but this experience was extremely visceral for me. I started thinking about my own career and the education of our students. I started thinking about our teachers who we ask to take out of their comfort zones at times with the integration of technology.

As if perfectly timed, the next week I was back in the states (now re-learning how to drive on the right side of the road) and preparing for our first ever iLeap Academy for internal staff. iLeap Academy is an immersive learning expedition of sorts. Tim Yenca (@mryenca) and I train teachers over several days on effective and meaningful ways to integrate technology. We also visit many of our classrooms and let the teachers take on the role of the observer to see 1:1 in action.

This academy isn’t for the tech savvy teachers. It’s for the teachers that have sound pedagogy and content knowledge that are just looking for a way to improve their practice with the integration of technology. Over the course of four days, 36 brave teachers sat down in their seats and prepared to drive down the wrong side of the road and get out of their comfort zone.

They were introduced to boundary-pushing concepts, forced to competitively collaborate in a series of challenges and an Appmazing Race, and even had to endure some of my most difficult brain break challenges on top of learning new tools and ways to integrate them. Like my drive up to O’Reilly’s, I could sense that many in the crowd had some fears or discomfort to some of the concepts and ideas being discussed, but decided to take the ride anyway.

When the week ended, Tim and I went back to review some of the comments from the exit survey. We have done iLeap Academies for other districts, (next one is November 8-10, register here!) but never our own staff. We were both floored by the responses:

Wonderful experience, I feel I am walking away as if I went through a technology boot camp and going to try some of these things next week. Very excited to try all of this in the classroom and can’t wait to see my kids reactions to some of the ideas!

It was excellent, I would recommend it to every teacher I know!

I really enjoyed the opportunity to come and learn about technology even in my 33rd year in education.

One teacher, who was in his 30th year of education, even took the time to write our superintendent to tell him that this was the best professional learning experience of his career. Many of the teachers in side conversations expressed initial hesitation for attending and being a part of this. It was a couple of days out of their classroom which means sub plans, playing catch-up, etc. and it also meant learning about some new ideas. But after the experience and stretching them out of their comfort zone, they went forward with confidence and ready to take a risk.

As Tim and I visited campuses the following day, we saw many of our “iLeapers” proudly wearing their iLeap shirts and more importantly, putting into practice immediately some of the things they had learned.

That sense of euphoria from learning something new can come in many different ways. It comes from trying new things and getting out of your comfort zone. It comes from sharing an experience with friends or colleagues as you travel down a narrow road. It comes from not “should-ing” on yourself and being brave. While the peril that exists on the other side of our choice may not always be a deadly cliff, taking a risk or changing a mindset is still an extremely uncomfortable thing for our brains to do.

I applaud all those teachers out there that continue to try and improve their craft.

So take a chance and drive on the wrong side of the road every so often when it comes to your teaching craft. The pay-off for student learning can be spectacular. Much like the view from the top of a rainforest.

“View from the top” of O’Reilly’s Rainforest Retreat – We made it!