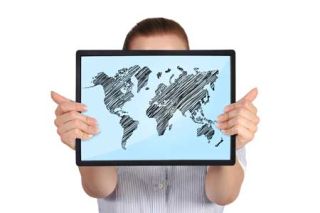 So I’ve been lucky enough to spend a few days in Oslo, Norway, and when I’m not at the SETT conference, I’ve been able to spend some time seeing Oslo. I was talking to one of the conference attendees, and I’ve told him my plans for what I’m going to see, and his answer was, “Well, you’re seeing all the major things to see in Oslo!” But, of course, I’m not. And it’d be ridiculous to assume that I am anything but a tourist here – getting the superficial notion of Oslo with, perhaps, because I’m making the real attempt to watch and listen, a fleeting glimpse of what is really here for the people who know it and live it. That’s just what it means to be a tourist. If I really fell in love with Oslo and wanted to find a way to know it in a real way, I’d find a way to immerse myself. I’d look for a visiting professorship and move here for a year. I’d find a way to live this place in a much more real way, beyond the city square.

I was thinking about this idea as I stood on the Oslo Opera House and looked out over the city — and I was struck by the thought that, in education, we too often encourage tourism of the mind. With three hour workshops for teachers to implement complex pedagogical shifts or conference sessions that start, “Everything you need to know about…” or – on a perhaps more dangerous level – fast-track programs toward teacher or principal certifications, we encourage tourism of these ideas, not deep understanding, and then we wonder why implementation so often lags or why – to make the metaphor complete – implementation seems so superficial, so… touristy.

For us to truly innovate and find ways to break down the very real, very entrenched notion of school that exists for too many students, we have to be more than tourists of our ideas. We have to engage in deep study. We have to immerse ourselves.

This isn’t to say, by the way, that the three hour workshop or the conference doesn’t have its use – it does. But it should be a starting point, not an end point. It should be a deepening or a framing of any idea, not the end all and be all. The pedagogies we will need will require us to be scholar-activist teachers. We have to be educators who understand the difference between being the tourist of an idea and the master of it. American education has been plagued by tourist reform — the idea the we can read an article rather than a book, the new program we can learn all about in a three hour workshop, rather than fully and intentionally plan for change. And over and over again, we are shocked when the ideas don’t fully take hold.

It is borderline criminal that we waste that kind of time.

Because whether it is inquiry-driven teaching, restorative practices, project-based learning or any other idea that we may want to leverage to transform our schools and our classrooms, we have to take the time to truly immerse ourselves in that idea if we expect to see the changes be sustained, real and powerful. Otherwise we will be tripped up by the first time it gets hard or goes wrong or just surprises us. We have to be more thoughtful in our embrace of new ideas so that we have a better understanding of what is lost and what is gained. We have to be more deliberate about the structures we set up when we evolve our schools so that innovations are sustainable. We have to be willing to take the time to invest deeply, so that we have a strong sense of the changes that students and teachers will have to make as they take on new ideas as well.

In short – we must be thoughtful, intentional and deeply knowledgable as we seek to transform our schools. We have to be residents of our ideas, not tourists. For me, it is the only path to change.

Chris Lehmann is the founding principal of the Science Leadership Academy, a progressive science and technology high school in Philadelphia, PA. that was recognized by Ladies Home Journal as one of the Ten Most Amazing Schools in the US and was recognized as an Apple Distinguished School in 2009 and 2010. Chris was a 2014 winner of the Harold W. McGraw Jr. Prize in Education and has been honored by the White House as a Champion of Change for his work in education reform. In June 2010, Chris was named as one of the “30 Most Influential People in EdTech” by Technology & Learning Magazine. Read more at his blog, http://practicaltheory.org/blog.