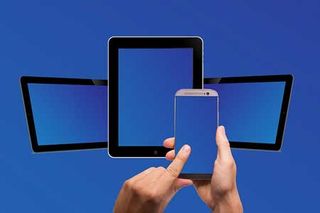 I was approached a couple of weeks ago by the good folks over at ISTE to create a commercial for my book series Mobile Learning Mindset. My only perimeters were that it had to have a holiday theme and I had to shoot, edit, and publish it completely on my own with no budget. Back in the stone ages, I used to teach a “young film makers” class with students and have always enjoyed the iPadpalooza Youth Film Festival, but I rarely ever got to make a video on my own.

So, knowing that I had no budget and no actors, I decided to recruit my own children to shamelessly plug my book series. If you know me, you’ll know that I did this totally tongue-in-cheek because I’m not a fan of self-promotion. (some of you are thinking…”yeah, right”)

However, I truly love the film making process. From storyboarding the script, to preparing the room, the lights, the props and getting the kids in make-up and costume. It was a fun event for the whole family and made me realize that I live with a bunch of divas. My youngest, actually refused to say her line so I had to bribe her with chocolate and get my wife to shoot the seen with her. In the end, I like the result and the girls are already asking when we’ll make the next one. (stay tuned for a “Shamwow-like” infomercial coming when the last two books are published)

I hope you enjoy the outcome and the little glimpse into the lives of my family members who have to put up with me on a daily basis: