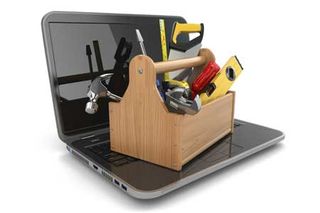 The Slack Design Challenge continues! If you haven’t been following my last few posts, I have decided to take entrepreneurship in our makerspace, called The Innovation Lab (under construction), to the next level! In my last post, I announced that FH Gizmos, our student-run edcorp, has been hired by Slack. Since my last post, I’ve learned a lot about evolving our makerspace into the three distinct student-run businesses it will become next year.

Since I last wrote, students have made their way through our design process. We started with empathy to understand Slack’s need. Next, we moved through the define, imagine, and make stage as we produce prototypes to help solve Slack’s problem. This week, we are wrapping up our in-house testing stage. I’m mailing our best prototypes to Slack tomorrow for their feedback.

The biggest lesson I’ve learned about combining entrepreneurship and the makerspace actually took me six months to figure out. Even before FH Gizmos started working with Slack, the co-founder of Real World Scholars, John Cahalin, and I have been discussing the difficulties we’ve found in moving kids from thoughts to action; taking kids from design thinking to design doing. Choice paralysis and fear of failure is something I see a lot from students and even adults. Some people would rather do nothing than do something wrong. You can’t blame them. For years, schools have punished kids for making mistakes even though we know that’s how learning happens. If you’ve ever run a business or created something, you know that their isn’t always a clear path to the right choice. Mistakes happen. Often, you have to take your best guess, see it through, and iterate on what you learn when you fail, then do it all over again.

Whether it is the due date, the real client, or having a manufacturer waiting to turn students’ ideas into real, sellable products, I have been teaching with a sense of urgency. I have been getting on my kids to make decisions, fail quickly, and bang out another prototype. I have been saying things like, “done is better than perfect.” I’ve been telling kids that their prototypes are going to fail and that’s ok because I want them to test their way to the right answer. Hurry up and build the plane while it’s flying.

John from RWS called me last week. As we got into another brainstorming session about moving student thoughts to action, John taught me about the concept of Shipping and asked me what that would look like in the classroom.

The concept of Shipping was new to me, but good teachers wanting student learning to be authentic isn’t new. We want our kids to learn the things they’ll need to be successful through real-world experiences. To do that, we have put students at the center of the class and help kids summon the courage to turn thoughts and ideas into actions that they are then brave enough to share with people outside the walls of the classroom. In my program, I need to help my kids Ship! Shippingmeans every time a kid takes a thought, idea, prototype, product, elevator pitch – anything – out the classroom door and into the real world, they are shipping it! The urgency that I am using to move students toward action can best be summoned up by the Ship It mentality. Helping my students Ship needs to be a focus in my program going forward because it’s never been more important to reframe failure as iteration.

We used a Google Form to survey students on their perceived talents. Students were asked which talent – creative, logical, outgoing, and technical – was most to least like them. Instead of randomly assigning groups for the Slack project, we took these student responses and made groups that had a student that was strong in each one of these talents. We also made sure that groups had an even mix of boys and girls.
Overall, this experiment was a success. Each group member was promoted to team leader when they reached the design stage that best matched their perceived talents. Some students struggled to work with members of the other gender at times, but, overall, having different voices and talents represented in each group made a positive impact on the quality of work. Next year, I’ll refine and reuse this method to make predetermined business teams based on a student’s perceived talents. I hope this method helps foster leadership skills, stretch talents, and grow an appreciation for diversity in group dynamics.

Waste Can Be Combated

For the Slack Design Challenge, we wanted students to prototype quickly using the simplest, cheapest supplies possible. This meant a trip to the dollar store! I kept careful track of supplies and how they were used because waste is expensive for makerspaces and a valuable lesson to teach young entrepreneurs.

Scout and Sketch in action

After our four week make/test design loop, I figured out that it cost about a $1.05 per student in prototyping supplies. Meaning, I see 225 students in The Innovation Lab. I needed to buy around $230 in supplies for prototyping. Hot glue, tape, popsicle sticks, rubber bands, and cardboard were definitely the most popular supplies. Most of the other stuff I bought went unused.

The first week of the make/test stage of our Slack Design Challenge was a real eye-opener. Students went through supplies at an alarming rate! A lot of supplies were wasted and trashed at the end of class. To combat this, I added the Scout and Sketch step to the Make Stage. During Scout and Sketch, students were not allowed to take supplies. Students were asked to scout out what materials were available to them to build with, sketch how they were going to use these materials in their prototyping, and list what these materials represented in a final product. Meaning, if students used rubber bands in a prototype, they had to explain what the rubber bands would become in the final product. Pausing for thoughtfulness dropped cost per student significantly. I think I can get cost down even more by improving thoughtfulness and buying the supplies I know they’ll use. I also had our custodians bring in any cardboard boxes the school got. Free cardboard is best cardboard.

In my next couple posts, I’ll let you know how the manufacturing and final delivery to Slack goes.

P.S. – I want to make a jobs board similar to Favro or Trello for my classes. I don’t know what that looks like. Thoughts?