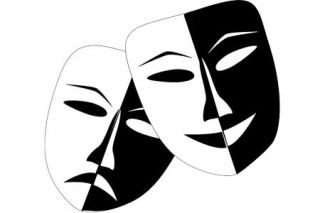 There are some meetings that you find yourself in and you're just counting down the minutes until it's all over. The presenter knows you don't really need to be there, you know you don't need to be there, and you probably couldn't recall anything the presenter said during the meeting. Then there are those meetings when you're like Richard Dreyfuss in Close Encounters of the Third Kind.

"This means something. This is important."

Well, as I recently set in an Association of Talent Development meeting, I had such a moment. I was about 5 minutes into the meeting and I knew I was participating in an event that was going to add another tool in my toolbelt in terms of professional development.

The session was led by Kate Bringardner from The Speaker's Studio in Louisville, KY. They offer a variety of coaching and training options and this event was centered around improv. I thought we might end up like an episode of the Office, which was totally fine with me, but I learned way more than I honestly expected going into the night.

Kate and her co-presenter took us through a variety of improv exercises. They were fun, funny, and made you step out of your comfort zone. If I were to describe them you might say that those were some nice ice breakers. However, these were much more than just some games because they were centered around their 3 rules of improv. It was these 3 rules that I've been pondering on ever since that meeting and it's these 3 rules that I think many of our school districts lack.

The first rule of improv they dropped on us was to say "yes". Improv can make you uncomfortable because you don't really know what could happen next. Sounds a lot like a day in the life of a teacher. One thing they said over and over again at the beginning was, "the only way to lose is not play." See, saying yes isn't about being a "yes man" or a "yes woman". It's about playing the hand you're dealt the best to your ability. We learned really quickly that whatever you think might happen next was not going to happen next.

In our schools we need a "say yes" culture. We all need to say yes to the hand we are given and figure out how to make it work. It really reminded me of somebody I've worked with over the years. When I first met this person it always seemed they knew why what we were trying wouldn't work. It didn't matter the idea, they were going to shoot holes in it. One day we were having a conversation about it and I asked that person to shift their thinking. It's not that they wanted what we were doing to fail. They really were trying to help by finding the weaknesses in the plans. However, they were being shut out because they were being perceived as a negative person. Instead, I asked them to shift from thinking about how something might fail to thinking about how we can make it work.

That's what saying yes is all about. It's not about adopting bad policies to go along to get along. It's about finding a way to make things work.

I immediately thought of our good friend Amber Teamann. The first time we had her to our eLearning Conference she told a group of principals that her rule for her staff is that it's their job to make her look good and it's her job to make them look good. Simply put, you've got to have each other's backs.

There is hardly anything that fires me up in education quicker than this notion of competition inside of education. If all you are worried about is beating some high stakes test, out performing the neighboring school or school district, or being the best teacher in the hallway, then I'm sorry, but that's pretty small minded. Education is about the greater good and we must resist the societal pressure to turn it into a competition.

Some of our improv activities got out of hand real quick. We said some ridiculous things and whatever was said, you just had to go with because your partner was relying on you. There is something freeing when you take the focus off of your own performance and you put it on your teammate's performance.

3. Be Curious, Not Critical

Some of the other benefits of improv, and maybe they're ones people think of first, are it forces to think on your feet and it gets you comfortable with speaking your mind. These are two things that we all need more of in our individual classrooms, our school buildings, and our learning community as a whole.

As educators we've got to be able to think on our feet. There are hardly two days alike. Even the year that I only had one prep and I taught the same lesson five times a day, I never had two identical lessons. Improv is a great way to help hone that skill and to do it a fun and engaging way.

However, we've got to do more than to think quickly, but we've got to be able to speak up. Employers will tell you that they want you to speak your mind. At least most of them will tell you that. All of us as classroom teachers have encouraged our students to speak out when they have a question and don't understand something. We also know that more often than not, students (and adults) would rather sit in silence and be lost than to speak up and feel stupid or dismissed. We feel this way when we are entrenched in a critical culture and not a curious one.

Like I said earlier, our improv activities got out of hand in a hurry but they kept flowing as long we stayed curious and not critical. The same can be said of our schools. People don't speak their mind because they are afraid. They are either afraid of their ideas/thoughts/questions are wrong/bad/stupid or they are afraid of how they will be received.

If we find ourselves in an improv situation and our partner(s) starts throwing out ideas that make no sense to us we will be faced with a choice. Our we going to be critical of that idea and shut down the conversation or our we going to be curious, make our partner look good, say yes, and figure out a way to make it work.

So I think I want to adapt this into a keynote or breakout session and add it to my menu. I think it would be a cool and fun session to do with a room full of educators. There are some pretty awesome large group improv activities you could start off with, then launch into the conversations around these 3 rules of improv, weave in some moments where you bring up some audience members for improv activities, and I think you'd have a fun, thought provoking keynote.

Brett Clark is the Director of Technology for Greater Clark County Schools in Southern Indiana. Previously he served as an elearning coach and math teacher. Read more at www.educationdreamer.com.