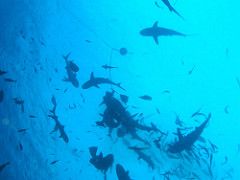 During the past week --- as folks have been flocking to Google+ --- I got to witness a truly wonderful event: an actual 13 year old signing up for an account on Facebook.

My daughter turned into a teenager last week, and as promised for years, she had my wife's and my blessing to join her friends who have already staked real estate on Facebook. Thanks to the power of the Internet, I can show you exactly what this experience looked like:

I kid you not; it was exactly like adding water, and watching a "Magic Crystal Garden" appear before our eyes.

If you've never experienced a teen signing up for a Facebook account, then you haven't really lived... at least not on Facebook. The experience was totally different than what I've experienced over the years that I've been on FB: my community has grown slowly over the years, people "friending me" in spurts. For my daughter, it was instantaneous. It resembled a "shark frenzy!" For instance, the moment she "friended" someone, almost instantly, they approved her friendship request. They were obviously right at their computers. On top of that, the moment she started getting friendship requests approved, she was receiving friendship requests from people that she hadn't found yet. Her community grew in an explosion. She went to bed that night with close to 150 friends. This took about 20 minutes!

Full disclosure: I used to really dislike Facebook. I didn't see the point of it, and preferred Twitter for my PLN updates. I've since softened to Facebook, and must admit, it's become a daily staple for me to catch up both professionally (following other teachers) as well as staying in touch with family and friends. Watching my daughter begin a Facebook "journey" has provided me with the first opportunity where I've actually worked alongside a teenager at the site; until this time, all knowledge of student/teenager use of Facebook has been through what I've read, heard, or supposed. My understanding has been theoretical.

This was a huge revelation to me. Until now, I really could only guess at what the experience was for a young person on Facebook. Sitting next to my daughter allowed me an entirely new vantage point. The discussions we've had and continue to have about Facebook have opened my eyes to its appeal, power, and dare I say, necessity.

This is where all her friends are. They've been there for years, and she's been walled off from them. I don't for a moment regret our family's decision to wait until she was 13 for her to start an account, but it's clear that she is now allowed access to her community in ways that were before denied her. I am watching her friendships grow and continue throughout the day. She is in communication with friends that she wouldn't have had access to at all until the new school year starts. She even has rekindled a friendship with a best friend who moved away years ago.

The transformation that happened for me was that I suddenly understood Facebook on a level previously unknown (by vicariously entering into Facebook anew during her signup) and I could clearly imagine myself as an adolescent having such an amazing tool. Without a doubt, I would have loved having this when I was younger! It offers an entirely new dimension to my daughter's summertime. It further expands conversations among her class. It offers meaningful and relevant reading, links, photos on the Internet. It provides access to her "peeps" throughout the day.

To be honest, I know that starting a Facebook account is like opening "Pandoras Box." I still fear many things about this new account in our house. I worry about all the usual suspects: privacy, cyberbullying, strangers, inappropriate material... privacy. I hope that all the digital citizenship and safety skills that we've taught our daughter over the years will help her in this new excursion into Cyber Space. We will of course continue on with these skills... the only difference really is that now we're doing it for real. It's been one thing to prepare my daughter for Facebook on a theoretical level as opposed to actually using those skills in Facebook.

Watching my daughter in FB and moving from theoretical to actual makes me wonder more than ever why it is that we're blocking Facebook from most schools.

First, in keeping Facebook as a banned site, then on some level, aren't we in fact banning one of the most essential ways that students are communicating and interacting with each other? Imagine this practice applying to other ways that students interact: such as recess or lunch conversations. In banning, are we denying, or rather ignoring a prominent part of our students' lives?

It's been wonderful to see that my daughter is using her Facebook time in a healthy balance with the rest of her life. In other words, no matter how cool it is, it isn't dominating her time, online or off. It is definitely a part of her now and there's no going back to life before Facebook for her. Similarly, now that I've been able to share the journey with her, there's no going back to thinking about Facebook in a theoretical manner for students. I finally got to see the real deal.

I think I finally get it now.