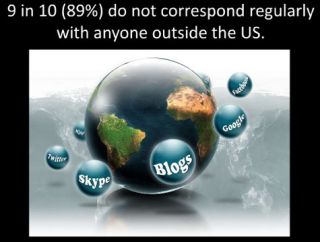 If you are NOT teaching or attending an international school, nor live in a metropolitan city, raising global awareness among your students does not happen by osmosis. As a teacher, you have to work hard to expose your students to multiple languages, cultures, geography, different customs and traditions. Global Awareness, according to The Partnership for 21st Century Skills, includes:

Young Americans appear to stick close to home, reporting limited contact with other cultures outside the U.S.

Raising global awareness and making global connections for teachers and students has been one of my goals this year. Although isolated, one time connections are better than none. I am witnessing a transformation in students and teachers who are regularly participating in global connections. Let me give you an example: Third graders have had opportunities to connect live via Skype to Italy, Israel, New Zealand, Finland, Canada and various states within the USA this year. Alison Quinn, the teacher from Finland, wrote a reflective blog post about our connection:

They asked and answered great questions that highlighted both the differences (geographically and culturally) and similarities – this was so key. The similarities now seem insignificant – two kids on opposite sides of the ocean have art as their favourite subject – both groups of kids like pizza, the same TV shows – and the same Hannah Montana song. But these seemingly insignificant shared pieces of pop culture astounded and united the kids who were oceans away from each other.

I am in complete agreement with Alison. Although seemingly insignificant, these kinds of interactions contribute to a connected feeling, they contribute to a global awareness, that otherwise would not exist.

Seeing students being aware of a bigger world than their own backyard is a first step towards global education. Hearing students use names of far away countries, talk about different languages, cultures and traditions as if they were frequent travelers and jet-setters is a step in the right direction. Making connections with students from around the world is becoming "just the way it is"... normal... part of their lives in the 21st Century. Take a moment to watch and listen to the third graders (from the US) talk about what had surprised them when skyping with third graders from Helsinki, Finland.

Around the World With 80 Schools- Helsinki from langwitches on Vimeo.