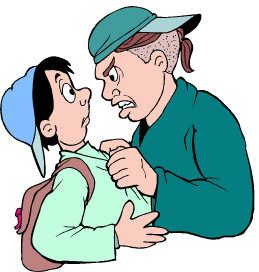 There's a lot of advice about on the subject of how to deal with cyberbullying, and from what I've seen it all falls into one of the following categories:

Personally, I think there is more that schools can do to shore up potential victims so that if and when the unthinkable happens they have strong inner resources to draw on. The notes which follow have been written in the light of my own (recent) experience -- not as a teacher, but as a victim of cyberbullying. Yes: it can happen to anybody. And unlike the other usual assumption, as embodied in a recent Guardian report, it can just as easily be adults bullying other adults as kids victimising adults or vice versa.

Is 'cyberbullying' a helpful term?

To understand this, you have to bear in mind that the term cyberbullying is, really, a convenient euphemism. Bullying is bullying, and periodicals, such as the Times Educational Supplement, and the internet, are rife with horror stories of managers bullying their staff, of staff bullying their managers (somewhat rarer, it has to be said) and workers bullying co-workers. Giving this behaviour a new label, such as 'cyberbullying', not only serves to diminish its importance but also to conveniently pave the way for its being seen as an educational technology problem rather than a school-wide problem, and even a society-wide problem.

The only merit in using a term like 'cyberbullying', in my opinion, is that it draws attention to the fact that, because it takes place online, its perpetrators can hide behind a cloak of anonymity. In that sense it is possibly different from, and worse than, bullying in the physical world. But to be honest, this is splitting hairs: it's like saying one form of toothache is worse than other, ie it is a statement which is of absolutely no use to the person suffering.

The situation in which this happened to me was that a few weeks ago I was invited to become an online forum host, as the organisation was looking for someone who had a good understanding of educational ICT (information and communications technology).

I started on a Monday. The following Friday, I resigned. Having spent a week putting up with insults, abuse and unprofessionalism from anonymous people, I decided that this was a just a drain on my spiritual energy. In my daily life, I choose to spend time and have dealings only with those people whose company enriches me. I happen to think that life is too short, and too precious, to waste time and energy dealing with people whose sole delight appears to be the denigration of others. Hence my resignation. But what exactly happened?

Well, I don't want to go into detail because I should imagine that the people concerned will derive some degree of perverse pleasure from seeing their particular insult described. In any case, most of the behaviour I was subjected to was not abusive in itself, but low-level stuff which, taken individually, looks completely innocuous. This is, in fact, exactly the same as the sort of bullying behaviour that goes on in workplaces, such as being derided, insulted, ignored or sidelined. And because it is all so trivial, the person who is being subjected to it thinks that they must be imagining it, or making a mountain out of a molehill. It also makes it hard to complain. In this instance, the moderator, who was very supportive, encouraged me to report specific abuse; but in a sense, there was nothing to report.

That's how bullies thrive, or at least one of the ways: they conduct themselves in such a way that it is always possible for them to argue that they didn't do anything wrong, or that it was light-hearted banter which someone has taken the wrong way. But as far as I was concerned, what was at stake was not so much my feelings, but my reputation. After all, if you didn't know me, and you were to read page after page of derision directed against me, you could be forgiven for thinking that there is no smoke without fire. In fact, after just two days, I received an email from a friend of mine urging me to withdraw from this activity before my reputation was irrevocably damaged.

What I found particularly shocking was four things. Firstly, the fact that this sort of behaviour was engaged in by people who call themselves professionals. To take just one example, one of the participants in the forum said, "I suppose what we're doing here is cyberbullying, but I haven't stopped laughing for two days." Just think: this is the person to whom some poor child will turn when being cyberbullied. Is he really the right person for the job?

Secondly, it really takes very little time for self-doubt to start creeping in. If you care about what you do, you want to do it to the best of your ability, so when people whom you assume (at least to start with) are qualified professionals start to say you're useless, a part of you wonders if it's not actually true. Fortunately, I have sufficient inner resources and objective evidence to be able to overcome such feelings quite quickly.

Thirdly, I was quite taken aback by the ferocity of the invective hurled at me. In fact, it is true to say that not one objection to anything I said was in the form of a statement that could be argued with on an intellectual level. It was completely personal, so I chose to not respond.

I mentioned earlier that bullies thrive because they are often clever enough to disguise their conduct as normal. But another thing which helps them is the fact that other people tend not to get involved. And that was the fourth thing which shocked me: only two comments were made which disapproved of certain people's behaviour, and only one person privately emailed me. Edmund Burke said, "The only thing necessary for the triumph [of evil] is for good men to do nothing." He was right.

In the forum I've been talking about, nearly all of the unprofessional conduct was the work of three, possibly four people. Apparently, one of them has been warned several times that his behaviour is unacceptable. Why? Why does an adult need to be warned at all? When people do things I think are unacceptable on any forum within my control, I don't warn them. First I will delete their contribution and then, if they persist, I delete or block them. Why engage in a discussion about it?

What is your view on this? Am I right, or am I too harsh?

Practical steps to take in school

Based on my experience, I think the following steps should be taken in schools to help (potential) victims of cyberbullying.

I’d be interested in your views on how cyberbullying should be tackled.