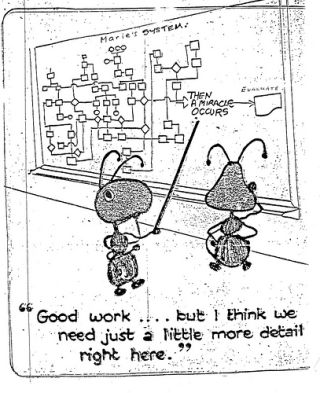 One of the things that educators, especially teachers, are really good at is talking. That's not intended as a criticism, just an observation. Talking is what the job is all about, regardless of what people say about becoming a guide on the side instead of the sage on the stage. Whether it's giving instructions, explaining a point, or teasing out of a student what she or he really understands, talking is what we do best.

But as in every other aspect of life, there are times when you can have too much of a good thing, and here is a case in point. I recently questioned the usefulness of a 'book' called the Field Guide for Change Agents, on the grounds that it's not a guide at all and contains no strategic advice whatsoever. This attracted two comments to the effect that the process by which the 'guide' was produced was really good in itself.

I don't doubt it, although I have to wonder why it took a whole room full of people an hour to produce a 47 page book consisting of quotations and pictures. Be that as it may, what we have here is the following, as far as I can tell:

Nowhere in the book does it give much indication of how to bring that change about, except for a few slides along the lines of 'foster collaboration'. That's in a section called The Change Agent Toolkit -- another misnomer: imagine if you went to your local DIY store and bought what you thought was a set of screwdrivers, only to discover when you got home that all it contained was vague bits of advice instead of the tools and instructions on how to use them. The fact that this 'book' is free doesn't really negate that argument in my opinion.

Reading this 'guide' reminds me of this cartoon:

(Sorry, I don't know to whom to attribute it.)

That, in turn, reminds me of all the worst team 'leaders' I have ever worked for. They would say, at the end of a meeting, "OK, so by next month X will have happened." And I would say, "How? By Divine Intervention?"

I have the utmost respect for the people who took part in producing this 'guide', and I'm sure the process was useful in many respects. But as a product, I have to say that, for me at least, the guide has questionable value.?