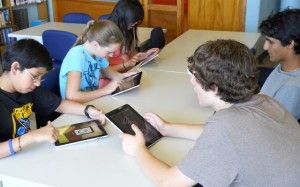 The New Apple iPad changes will transform the way our children learn and we work. Sorry to say, but Android tablets, even the most recent and slickest, for now, have been left in the IOS dust. I didn’t think that way until the New iPad announcement, but Apple is only a few more things away from making that tablet the only device anyone needs to carry. And unless Microsoft is cooking up something behind closed doors, in the next year, this may be game, set and match for our computing future.

While it’s true that I still feel more comfortable with the multitasking I can do on a traditional computing device—going from Internet searching—to writing—without skipping a beat, I’m certain that this will be the next step in iPad’s conquest of the new computing world. It will happen. I’m convinced that my style of working has changed—and will change completely.

I also think that it was very intelligent marketing to name iPads according to price, just like Apple did for their iBooks, and to avoid the confusion their iPod generations caused. Two prices make sense for now, starting at $399 for the iPad 2 versions, and the New iPad at $499. You can see where this is headed. It makes room for more versions, at possibly different sizes and prices.

So, the question is, “What about education? Which version, and what if your iPad program has the older iPad. What should district and school technology leaders do? What is the best plan for those professional development and technology resource directors?

Here’s what I think:

Adults, and especially young adults have grown up working with computers and not tablets. So, seeing the tablet path as the most direct computing route, now, will be a bit more difficult. It’s why we adults migrate back to the bigger machines to do what we consider more substantial tasks—like work. But tablets have quickly taken me from not touching screens to wanting to touch-react with every screen in front of me—and I’m disappointed when I can’t. The New iPad has narrowed the distance further. Its high-definition screen, and added power makes fully packed Photoshop and iMovie creation and editing possible. It has put us closer to the tablet as a full-bodied learning and computing device. I can only think that possibly in the next iPad iteration, all the computing tools we’ll need—will happen. Carrying an iPad with a Bluetooth keyboard, packed with powerful apps, and able to do high-definition media is not difficult to understand—nor difficult to use. We’ll just change our approach to completing tasks.

For those districts that purchased iPad 2 versions, it might make sense to drop those tablets down to primary and elementary levels, and invest in the New iPad version for student at higher levels. The screen resolution for reading on the new is better, so I’m sure the case can be made for younger eyes, but the New iPad may be best in older hands. For middle, junior, senior, and higher education the New iPad has the resolution and power clout to be a learning and working classroom star, as well as an individualized student studio. The new higher level apps will allow students to really work rather than just complete simple tasks. There will be a very small markdown for education iPads, but it won’t be a lot—even for the iPad2 version. In a year, or less, we’ll be going through another reassessment when the next iPad is launched. There probably won’t be any competition as I see it now, so this is the Apple IIe of this century for Apple, but at an much higher price. Jumping on this wagon is what education will do, and at this point, I agree that the jump is appropriate. Even if the adult in me would rather wait for everything—waiting is standing still.

I know that students won’t have the same relearning to do as adults when it comes to working with computers, because their computing has always been handheld, or moving toward it. It would be ridiculous to impose our traditional adult-computing work style into a tablet-base student-learning environment. We as adults need to understand that, move on, and teach the way students learn and work—in this new tablet way. Like it or not, the New iPad looks like the instrument.

As far as the education marketplace is concerned, presenting to students through these tablets is the way to go, and if you’re not looking at the New iPad as the vehicle, you’re wearing blinders. Turning the presentation from the front of the classroom will be easier, and teachers using technology will once again face their students during lessons.

In my opinion, anything Android in tablet form for students, even the latest and greatest, just lost traction with the New iPad release. And no peachy keen, cute names will help. While I do love many computing ideas—from laptops to netbooks to eReaders, and smartphones—I think the tablet bridge we’re crossing, now, is the one education will choose, because it is the best for putting learning in the hands of students—in a way that they’ll use—now and in the future—as well as in their careers. Our kids reinvent computing as we relearn it. Change is difficult—but this one will be good—we just need to get used to it.