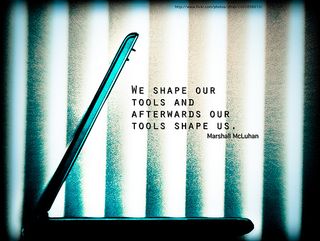 Traveling to new cities and renting vehicles I simply enter destinations into the GPS and follow the instructions. I really pay no attention to much other than watching and listening for my next turn (I always choose the Australian voice). Gone are the days when you studied a map, figured out your own route and familiarized yourself with your surroundings. That’s a trade off. We trade the convenience and accuracy of the technology and subsequently give up taking time to learn about our surroundings. Sure, I’m still able to learn about the places I visit but typically I don’t. I used to do so out of necessity and now that I don’t have to, I spend my time elsewhere.

I began to think about all the trade offs we make with technology. I’m not the first to have these thoughts but wanted to explore this from my own perspectives. I also don’t want to use the typical negative slant that this type of discussion can evoke. People often think nostalgically about trade offs and long for the good old days. That’s a bit too simple for me and is often bias towards personal experience as opposed to a more global perspective. Like the GPS example, I do recall with some fondness scouring maps and trying almost to memorize something new and then set out often with a navigator in the passenger seat to try and “conquer” a new land. Sentimental, but I’m not about to go back and realize that many people don’t share the same love of maps and navigation. Here are a few more trade offs to consider.The Kindle. This is another one of these much debated and discussed trade offs where emotions can run surprisingly high. No question the ability to carry with you hundreds of books, the weight, the ability to digitize and make notes searchable is very appealing. Yet purists, talk about the tactile nature of books, its simplicity and the ability to showcase your accomplishments in a physical shelf. This debate continues and yet many are living in both worlds.Text Messaging. Certainly becoming more mainstream and less of a discussion than a few years ago. In some cases we communicate more than ever with short bursts of information and exchanges that can be processed when needed. “Pick up milk” is now a quick thought that can be created and sent in seconds as opposed to a phone call that could last minutes. We’re also seeing it used to share less important information we might not have shared in the past. Some would claim it’s strengthening relationships. Taken away are phone calls and conversations that developed relationships and trust not to mention the ongoing conversation about etiquette.Itunes/Napster. Or more specifically the ability to pick and choose which songs we listen to. No longer are we subjected to a radio station where they play a variety of music, some we like and some we don’t. We no longer can even hate the same music together because we now have choice and customization. “Disco sucks” is not the kind of movement we’ll likely see again, for better or worse. Personalization is present in all forms of media. For the most part, it seems great and yet water cooler conversations about the latest episode of “x” are less frequent because we don’t watch the same things anymore. These conversations are now take place in online communities more so than local. Our tastes are more diverse than ever for better or worse.The keyboard.The only time I use a pen it seems is to sign something or fill out customs forms on airplanes. I tried writing a nice message on a card the other day and was shocked at how awful it looked. We have primary teachers and parents concerned about the lack of printing and handwriting instruction. Yet the ability and affordances of a keyboard are overwhelmingly better. No one questions the significance of the keyboard but we still have some lamenting the loss of the handwritten word. For the record, I took a typing class in grade 10, over 30 years ago, got my lowest mark in High School 59%. Possibly the most valuable course I took.The calculator.This one’s been around long enough and yet we still hear complaints of people losing their ability to calculate. It’s true, long division skills are nearly obsolete. Understanding when to divide is the real skill and yet understanding division remains important and this is actually at the crux of many current debates over the shift in math curriculum. The way in whichcomputers and technology are influencing mathhave some people suggesting we’re giving up too much.The microwave. I heard this trade off from elsewhere but it found it to be true. We’ve opted for convenience once again and perhaps lost the family meal. Certainly other things have contributed but the fact that a 5 year old can now make a meal in minutes, it’s partly to blame for the deterioration of family meal time. It doesn’t have to mean that and for many it may not be a factor but it’s certainly had its impact. It’s also brought many more foods into the market that are void of much nutritional value. Yet, I don’t know anyone who doesn’t own a microwave.The car. Certainly not viewed as a technology today. As Alan Kay says, “Technology is anything invented after you were born.” According to that definition a car isn’t a technology. It might be difficult to imagine but it wasn’t as well received and accepted as you might think. Worries about safety, destroying the landscape and noise were voiced among many. Today of course we worry about pollution, fuel consumption and even how it contributes to an unfit society. Yet there’s no way we would abandon it. It’s an evolving technology where it is constantly being improved upon and tweaked but the car itself is here to stay.Notice I placed these in reverse chronological order. I’m guessing that as many of you read these, you became less and less torn with the trade offs. You’ve either come to terms with the them or have never even considered the alternative because some have become simply a part of our world.

This is by far not any kind of exhaustive list of trade offs. I’m sure you could list others and even uncover trade offs, we often don’t consider. (the microwave, for example was one I hadn’t fully considered) The point for me is that we examine these trade offs and consider the implications. If done right, we don’t have to make them wholesale. Technology, as many say, is not neutral. It influences us.

I hope we can focus, not on making it a zero sum game but rather being thoughtful and using things wisely. We live in an age where we’ll be constantly having to examine and understand the trade offs not just with technology but change in general. No matter our instinct and the way new technologies are marketed, we need thoughtful consumers who can understand the broad implications, not just our own biases and consciously use them in ethical and meaningful ways.

Excuse me while I go study a map.