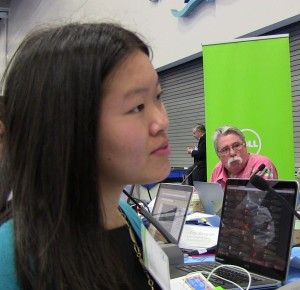 At #ISTE12 in San Diego, I had the opportunity to sit at Dell’s Education Think Tank Table #DoMoreEdu. It was pretty much led by a few very incredibly intelligent students: Zak Malamed (@ZakMal), Allison Wu (@AllisonSWu), and Nikhil Goyal (@TalkPolitical) who were courageous and thoughtful in tossing out ideas. I think sometimes as we get older, we become more cautious, think great ideas, and then decide not to share, or we become one-sided in our views. The young people at the think tank were refreshing. They may not have had the longer life experiences of some participants at the table, but they certainly keyed in on topics that would not have been suggested if they weren’t there.

At times, the older crew at the think tank table veered off topic. Thankfully, the younger participants were patient and able to reel us back in. For my part, I thought it best to share thoughts that were more than simple fixes, or denunciation of a single product or technology. It’s easy to blame the tech rather than figure out why the tech isn’t being used properly. Getting all teachers the tools they need and doing more experiential lessons, beyond slides and dragging words, is a better and more positive direction. And while apps were part of the conversation, too, my advice is that most educators needed help there, too. While most educators know how to work a smartphone or smart device, teaching with one and using appropriate classroom apps is not something most do. The most important point in the discussions, for me, happened toward the end when Zak Malamed was asked about changing the classroom and learning.

Zak had difficulty. It was the first time all day I’d seen him searching for words. In a day at the table with him, I sort of knew him, so I asked if the better question was “Zak, how do YOU learn?” His eyes brightened, and then there was a smile. I shared that I love learning from videos, and that the other day when I had no clue how to cut a kiwi fruit, I found the how to online, watched the video, cut the kiwi, and while it’s not rocket science, I’d never forget what I learned. Zak was off and running. He shared that while he learned from reading and video, his best learning happened by doing. He was an experiential learner. We toss around project-based learning a lot, and most 12-year olds can say their lesson was project-based, but I think even there Zak would most likely find something in-between project tasks, and come up with something creatively different—unique. So, how do you learn? Start by asking kids that.

The young people at the table really were proponents of student-initiated learning. A few adults at the table were as well. While I love the idea, and it made my life’s teaching work experiential for my students, in most real world districts and classrooms, today, planning is part of teaching goals, too. I had a friend, who walked into his math classroom each day and asked, “What do you want to do today?” It’s a great notion, but he had no goal in mind—other than winging it daily. He’s no longer teaching. I always worried about his students, especially the ones without the awareness of knowing how best to match up how they learned, with that motivation needed to learn—which is another intangible.

Some “push back” was tweeted that the same plan we had for pencil and paper tasks would be sufficient, and more would be wasting time or too complicated. Another tweet was about doing creative and constructive connecting and communications as the only plan necessary. Things I’ve heard before. I did creative connecting and communications with students and educators in my districts as well as globally, so I’m in the choir there. Without a plan, I wouldn’t have gained support to do more. If all the individual pioneers in a district do their own thing, it’s very difficult to gather more leaders throughout a school, over a district, and beyond. Maverick pioneers, and I was one for a time, or those lucky enough to work in districts where there isn’t any push back to individual ideas or “plans” are wonderful. The majority of classrooms and districts move a bit differently—and I’ll admit—a bit more slowly. It’s all so frustrating for those pioneers, I know, because it seems that everyone else doesn’t seem to get it. Remembering to add the word “YET” to that will help keep you sharing—and understanding patience will help keep you a positive voice. That audience, needing to hear it, is larger than the group sharing, and that larger group, for the most part, may not have the tech, or the freedom to use it—if they do. How to use it best for teaching and with kids sometimes never gets addressed either.

If you’re not willing to write a plan, write a proposal instead. Most proposals get read, even if they’re not all accepted. Proposals resemble plans, and they are easy to refer to later. You can win team and district support by using them. Always used to love saying, “Have you read my proposal? I’ll send it to you.” And anyone can write one. It’s a positive way to approach and organize change with new and specific ideas.

The line “sage on the stage…” is tiring. Let’s get to the point. The only thing kids get from sitting still in a classroom listening for 40 minutes—and not doing—is the feeling of how a backup sports player feels sitting the bench. Getting students into their own learning game isn’t new, but how to do it may be. Call students scientists, mathematicians, diplomats—and that’s who they will be in class. Doesn’t take much to know that if you ask a student kicking a soccer ball what he/she is, your answer will be soccer player.

People spouting about no longer needing professional development may not own a mirror, either, because it seems to me that sharing education and education technology possibilities really is a form of professional development for your audiences. Many teachers may need more than a read or a video—taking them on the field trip, actually having them learn and do is important, too. Just like Zak, teachers will discover a lot by hearing, seeing, and doing what they haven’t heard, seen or done. I’m not willing to give up on those lessons. Throwing a blanket over something in education or education tech isn’t a common sense way to deal with anything.

In most districts, where there is a technology committee, students are invited to participate. Allowing students to guide discussions that are about their learning should be at the top of the priority list. They just know so much, think so clearly, and bring so many new ideas to the table. I highly recommend following Zak Malamed (@ZakMal), Allison Wu (@AllisonSWu), and Nikhil Goyal (@TalkPolitical) further and possibly inviting them to participate or lead future discussions. They would make a great representative team in any international education, or student movement. It was a pleasure being at the same table with them. I was listening.