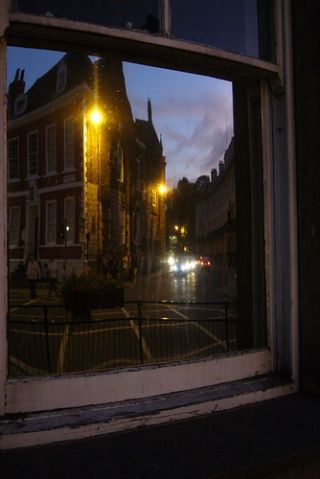 I think a good conference is one in which you come away with perhaps more questions than answers. Yes, everyone goes to such events looking for ‘solutions’, but in an intellect-driven (or it should be) enterprise like education, it’s often the questions that move us on. And the harder the better.

On that criterion, I would say that the second day of the Handheld Learning conference I’ve been attending in London, especially the morning, was a great success. Under the heading ‘Reflections on Learning’, four speakers gave us their perspective on learning. In the case of Zenna Atkins of Ofsted, the UK’s school inspectorate, and especially Malcolm McLaren – yes, that one – the perspective was quite personal.

When the videos of the sessions appear on the Handheld Learning Conference website it will be well worth sending a couple of hours watching them. For now, I’m quite interested in raising a few questions which were either posed by the speakers themselves or which occurred to me as I was listening to them. In this article I’d like to consider the views of Zenna Atkins.

According to Atkins, we need to shift our thinking away from structures and institutions, and towards learning and teaching. From her perspective, the student and parent are consumers of education, and the technology enables them to be more proactive than was once possible.

For example, she cites the case of her son videoing a near-riot going on his classroom whilst the teacher did nothing, and phoned her so she could watch it in real time. She phoned the school to tell them what was going on, and then was able to see a senior teacher walk into the room. At this point, the class settles down, of course, and there are no signs of the mayhem which existed before. The senior teacher confiscates her son’s mobile phone and effectively calls him a liar – but, of course, there is now evidence to the contrary.

Atkins also talked about the increasingly-common doctors’ complaint: that their patients know more about their own conditions than the doctor does.

What Atkins is describing is, in fact, what economists would call the move towards a perfect market. In such a market, suppliers of goods and services cannot foist a lousy product onto the consumer, because consumers, having perfect knowledge and no barriers to movement, can easily switch to another provider.

In this brave new world, parents will be able to choose from a menu of learning options for their children. In Atkins’ ideal world, parents would be given an educational allowance that would enable them to purchase the education of their choice.

I think this kind of world seems pretty Utopian, but only from a particular perspective: a middle class one. In practice, I would ask the following questions:

Firstly, although it is de rigueur to talk of people’s right to choose, I think there is also an obligation to ensure that they choose wisely. I hate to buck the trend, but I’d like to ask: is it possible that the customer really is not always right?

For example, some years ago I devised a course called ‘Understanding the British Economy’, and had this crazy notion that I would ask the participants to help frame the content. Well, they all had different ideas on what should or should not be included in the syllabus, but what almost all of them wanted was for me to teach them how to understand the subject matter in such a way that they would be able to avoid being bamboozled by politicians and the media in the future.

In other words, they recognised that I, as the expert, would be able to give them a set of tools with which to approach this area – a set of tools which they would be unable, without quite a lot of investment of time and energy, to put together themselves.

But I said almost all. One of them thought that every economic ill was caused, in some way, by the balance of payments. If I’d have adopted the view that the consumer is king, I’d have ‘mistaught’ him and all the other students in that class.

Secondly, although the example given is dramatic, and one which would make a good story to tell one’s friends over dinner, in other contexts the implications are quite chilling. For example, to earn a bit of extra cash one summer, I worked in a private, ie fee-paying, college. The Principal had the view that any kind of activity by the teacher other than lecturing was not giving value for money. The students had paid hard cash to act as repositories of the teacher’s knowledge. You couldn’t set a timed essay: the students could do that at home. You couldn’t have a class discussion: it was a waste of time. Or, more to the point, the students, ie the consumers, might perceive it as a waste of time.

And then what would happen? They’d vote with their feet, taking their spondoolicks with them. As if that were not bad enough, they would tell all their cousins ‘back home’, who would promptly withdraw their applications to attend the college next year.

So my next question is: if parents are going to become highly informed consumers (or proxy consumers) of education, shouldn’t they also be encouraged to learn the tools with which to evaluate the information?

Obviously, a riot is a riot, and you don’t need to attend classes in order to learn how to recognise one. But I can imagine a situation in which a pupil videos his teacher who is actually waiting for an answer to a question (as opposed to the usual practice of asking a question, waiting two seconds, and then answering it yourself), and shows it to his parents as evidence of the teacher’s time-wasting in the lesson. I’m not suggesting we can completely avoid such scenarios, but I do think we should at least discuss the possibility of their arising, and not simply accept that being well-informed, thanks to technology, is incontrovertibly a good thing. Having that extra information places a responsibility on parents to consider other issues, and schools might respond by helping them do so.

This brings me on to the second main issue raised by Atkins. In her view, degrees and diplomas and so on are becoming increasingly irrelevant. The technology now enables us to not only show what we have learnt and can do, but to benchmark our performance against that of others.

There is nothing new in this concept. Back in the 1980s people were doing psychology degrees which were largely (I think in one case completely) peer-assessed. Again, this is a romantic notion which is actually twaddle unless handled really carefully – by an expert. I know it’s old hat, but if we take the example of the driving test, if that was based on peer assessment I doubt that many people would live longer than their car! Yet, interestingly enough, the advanced driving tests are, in large part, peer-assessed, or at least peer-coached for: and they work because although all peers are equal, some are more equal than others. In short, some are experts in driving.

It seems to me that one of the things we are not always good at doing is asking the hard questions, such as: ‘OK, the technology can enable X to happen, but is X a good thing? And if it isn’t, what, if anything, can we do about it?’ This is not about becoming a latter-day King Canute but, in my view, being prepared to be cynical in the way defined by Ambrose Bierce, ie of seeing things the way they are, instead of as they ought to be.

You can follow the conference on Twitter by using the hashtag #HHL09 (that’s a zero, not the letter ‘O’).