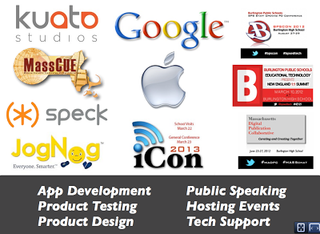 One of the exciting things about our high school (and school system) establishing a digital presence has been the doors that have been opened for staff and students to connect with others and build their own learning networks. The video above is the most recent example, featuring Hannah Lienhard a sophomore at BHS. Hannah and (a few other BHS students) had an opportunity to beta test a new app (Hakitzu) from Kuato Studios that is due to be released in the app store in the next week and then provide feedback to the developers on the experience.

There is another video that features a few more BHS students and some students from New Milford High School in New Jersey who also had an opportunity to try out the game which teaches students how to code by having them take on an opponent in a one-on-one battle where each player controls a robot. The players then move the robot around an arena and deploy different weapons by writing code.

Excitement around the release of this game has been building as evidenced by a recent feature on CNN. These types of opportunities are available to more schools and students if they are willing to extend themselves and build a learning network for themselves. We truly believe that students that learn how to do this will have an advantage over those who do not.

Here are a few other examples of the ways that our staff and students are connecting with others, building their learning networks, and establishing a digital identity.