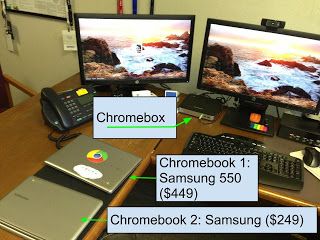 As the person in our district that is ultimately responsible for technology, I often end up making the decision for what devices a student or staff member will be using on a daily basis. One of my common practices is to live with a device before purchasing it or recommending it for someone else. With the lead up to 1:1 and Chromebooks in our district this year I have been "living Chrome" for the past year and have been primarily Chrome since September 2012. This is what my desk looks like:

The Chromebox is my primary desktop device. I have it rocking dual 24" monitors with a webcam, speakers, and a wireless keyboard and mouse. It is awesome to just sit down and work each day when the day starts or to come back in from being out and about and jumping right back into whatever I was doing. I use cloud printing (when I must print) that allows me to access multiple copier/printers in the office.

On the desk you will notice two Chromebooks. One is the Samsung 550, which became my primary computing device last summer. I can make it though a full day's work on a single charge - and I push my computers. It has also become the computer I use when presenting outside of school. The other device is the $249 Samsung Chromebook, which is the computer nearly 4,000 freshman and sophomore students will be using next year in Maine 207. As I said, I try to live like I expect others will have to in the future.

Why not pick one of the two Chromebooks and live with it? I have been proving the fact that it doesn't matter which Chrome device you use. I randomly pick one and run with it and have the same computing experience no matter what. Next year when a student has an issue we will "hot swap" a spare and expect them to keep working. I do that everyday.

There are obviously some differences in the devices. The 550 is the fastest of the three, but you really don't notice until you are working with a massive spreadsheet or have dozens (yes dozens) of tabs open. The Chromebox has the advantage of the dual monitor set-up, which makes me much more productive. The $249 model is actually my favorite. It is lightweight and is perfect for taking off throughout the buildings.

I do still have a Windows laptop available, but I rarely use it now. Sometimes I have a legacy office document to retrieve (although I am moving most of my documents to drive now) or if I want to make a quality screencast (an area where Chromebooks are still lacking) that causes me to fire up the laptop. I usually have to do this several times, because as it is starting up I go back to work on a Chromebook. By the time I remember the laptop was starting up it has already gone back to sleep. Just as my students will next year, I am living Chrome. If someone in my role and running a technology department can live Chrome, I am confident my students can thrive in this environment as well.

Henry Thiele is the Chief Technology Officer for District 207 in Park Ridge, IL. Read more of his ideas on education and technology at henrythiele.blogspot.com.