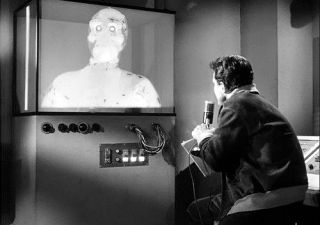 My beloved netbook is in a sorry state. It has been languishing for quite a while, becoming more and more depressed as it realised it could not compete with my iPad in terms of cool-ness. In the end, it was too lethargic to fire up at all, and attempts to run it direct from the mains were met with a cold snub.

Well, I bought it a new battery, and a new mains charger. I thought it would be pleased, and to an extent, it was. It actually works now, which is a novelty. However, depression or resentment runs deep, and it refuses to work for any longer than two hours on a full charge, instead of its original seven or eight.

SOMEONE will find a use for it! 1963 - "The Outer Limits" The Galaxy Being, by James Vaughn http://www.flickr.com/photos/x-ray_delta_one/

We live in an era when anything older than the current model is, well, old. There’s a lot to be said for buying new technology in school, but there’s a lot you can do with the older stuff too. Take my sorry netbook. I have discovered that 2 hours is all I need to write outline plans or articles, as I work in a café or in the garden. And unlike the iPad, I can type fast on its integrated keyboard, something I can’t do as well bashing away on a screen. What’s more, I don’t need the separate bluetooth keyboard I use in conjunction with the iPad, which is good, but adds to the bulk and weight I have to lug around.

All of which is a long-winded way of saying that there is always a use for old or older technology in schools, such as:

I am sure you can think of many other potential uses for older equipment.

There are a few “rules” concerning the dispersal of older equipment though:

That last point is definitely a plus as far as people visiting the school is concerned. It conveys the message that money isn’t wasted by continually replacing perfectly good older stuff with new stuff just for the sake of looking brand new.

And if good work is being done with all that older stuff, it will give the all-important message to colleagues visiting from other schools that you don’t always need the latest and smartest technology in order to transform teaching and learning.