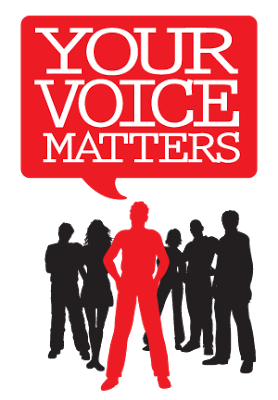 I often tell educators to be the change they want to see in education. This requires speaking up in any and all ways possible if you ever have the hopes of actually changing things. In education we often quip that our voices are not heard, opinions not valued, and our presence at the table when major decisions are made is absent. These statements are quite accurate from what I have experienced or seen as of late. However, if we just settle on the notion that this is how the world works and our voice will never matter, then how can we with a clear conscious complain about changes and reform efforts that we don't agree with? Worse yet, how can we idly stand by as many initiatives and mandates are put into motion that counter research and what we as educators know is best for our learners?

Going to town halls and information sessions is a good start to voice concerns and questions in a public forum. However, even in these venues, having our voices heard and getting a response with substance is a crapshoot at best. In my experience, I usually leave these sessions with more questions than answers. Frustration and animosity build, which doesn't do me or anyone else any good. I have learned that social media has become a fantastic medium to put issues out in the open and let our voices be heard.

Here is a quick story that proves my point above. Late last week I read an article about how elected officials in the county where my school is located passed a resolution to stop the Common Core. I came across this article in my Twitter feed where I have a column set up for #njed. The tweet I read blasted this anti Common Core and PARCC decision. It just so happens that I tended to agree with the decision and voiced my opinion supporting the measure as I feel we are rushing to implement too many initiatives at once. The result was a constructive dialogue between me and three other educators on Twitter. We voiced our opinions, provided rationale for our respective stance, and then carried on with our day. I was not shy about expressing my thoughts on the Common Core and PARCC out in the open. Part of me always hopes that respectfully pushing back on issues I don't agree with will open up a dialogue with the people making these decisions. I, like many others, want my voice to be heard on issues that impact my students, teachers, and fellow administrators.

Now back to my story. So I return home that same night and get settled down for the last episode of Walking Dead from season 3 (side note - just started season one a few weeks ago, became addicted, and had to finish before season 4 begins on 10/13). As I waited for the commercials to end, I took a glance at my iPhone and noticed that I had a few new messages. I quickly noticed an email that intrigued me so much that I paused the Walking Dead. The email was from Bari Erlichson, the Assistant Commissioner of Education in NJ. Her message began with congratulating me on the Bammy Award I recently received and then quickly transitioned to my comments earlier in the day on PARCC and Common Core. She bluntly asked if she could call me the next day to discuss my concerns.

Just as she promised, Bari called me in my office the next morning from her cell phone. We had a candid, respectful conversation for about 45 minutes mostly on PARCC, but also Common Core, NJ School Performance Reports, and Achieve NJ. I can't begin to explain how great it felt that my voice actually mattered and I was able to freely express my opinions without any fear. Did we totally agree with each of our stances? Probably not, but that is not my point. My point here is that we can use both traditional and non-traditional means of media and communication to make our voices heard. Don't settle for not being heard on some of the most important education issues of our generation. Blog, tweet, and pin your opinions as your dialogue is desperately needed. Let people know how you feel without being afraid. At the very least you will be able to get things off your chest.