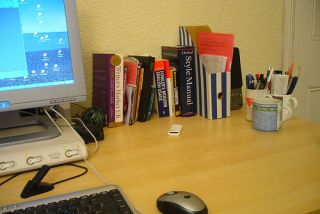 It is almost a year since I suggested 7 Reasons educators should blog. I’ve recently discovered another one.

Look, this is my situation. I have a book inside me. Isn’t that what everybody says? Except that in my case it’s true. In fact, I have several books, and updates to previously-published books, inside me. And that’s the trouble: they’re inside me, instead of inside my computer as a word-processed file ready to be turned into books that others can read.

The reason for this state of affairs is not laziness, I can assure you. But faced with the choice between doing some “urgent” work in order to earn a crust certainly (the work always seems to be urgent), and writing a book which may or may not earn a crust, I have to opt for the former.

I was bemoaning this state of affairs yesterday when Elaine said, “So why don’t you write the book as a series of blog posts?”.

I have had that idea before, but ideas, like seeds, have to be planted in the right conditions. Yesterday, the conditions were right; suddenly, the idea made perfect sense.

There are at least five reasons that writing a book as a blog post is a good idea. At least, good for me, at this time.

As Elaine said, the best way to eat an elephant is one bite at a time. (I need to ask her whether that is based on personal experience; I thought she was vegetarian. Anyway.) When I think “I must start the task of writing 30,000 words”, I sort of freeze up over the enormity of it all. (That is strange, to be honest, because it never used to happen. But still, it does, at least at the moment. I must be overworking.)

On the other hand, saying to myself, “I must write a 500 word blog post that will become a chapter, or part of a chapter”, is very doable. In the last two days I have polished off a thousand words with hardly a second thought. Only 29,000 words to go! I wish I hadn’t thought that….

Blog posts have to be self-contained, that is, they must work on their own. It’s true that the thousand words I’ve penned so far were written over two days in one blog post, and that they form part of a larger chapter, but each bit worked on its own. I think having a 500 word limit in your head is a very good discipline, and guards against excessive rambling and meandering.

You come across useful references

I use Zemanta, which suggests articles related to your topic. (I understand that Wordpress users my take advantage of a similar facility built in.) That means that I automatically come across references I may otherwise have not known about, and which have the potential to enrich the text or influence my thinking. I don’t have to use them, but it is almost effortless research; that’s the point.

I can publish the posts if I want to

Who says blog posts have to be published? I am not publishing the posts that form part of my book. But if I want to publicise the book at some stage, or if I wish to test the water to see how people react to the ideas contained within it, I can do so with almost no effort because the posts have already been formatted correctly. Unless, of course, you regard finding a suitable illustration and then clicking “Publish to blog” as effort.

I like to write, especially blog posts. I like to try to get my writing done either first thing in the morning, or later in the evening. In other words, during the times that I don’t feel I should be working. (Because I find writing so enjoyable, I have not yet convinced myself that it really is work, which is a pity.) Besides, first thing in the morning is a great time to write: no phone calls, no people calling at the door, just the birds, cats and the sunrise. It certainly worked for Anthony Trollope, who consistently bashed out 2,500 words every day before breakfast.

We often hear of blogs that have been turned into books, as a response to the blog’s popularity. I shouldn’t be surprised if some of them were intended to be published as books right from the start.

Lessons to be learnt?

I think there are some lessons to be learnt for both teachers and pupils from this, such as: