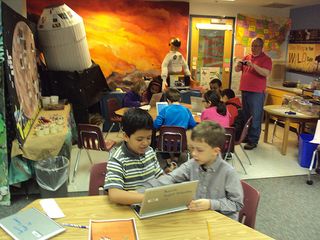 I’ve been looking at the Google Chromebook, and I have to say I am seriously impressed. There’s a lot of talk about tablets these days. I myself have promoted the idea of Bring Your Own Technology, which usually means a phone or a tablet. But the Google Chromebook is worthy of consideration, whether for yourself, or whether you’re considering taking your school into the mobile future.

In order to thoroughly evaluate the Chromebook from a school perspective, I not only used the device myself, but also interviewed Bruno Reddy, Head of Maths at the King Solomon Academy in London, and Jaime Casap, Global Education Evangelist at Google.

My experience of using the Chromebook

The Chromebook lends itself to collaborative working. Photo by Laurie Sullivan http://www.flickr.com/photos/projectdiscovery/

Using it as an individual, I found the Chromebook to be very good indeed. Here are the things I liked about it:

It has a keyboard

I use a keyboard with my iPad, but it’s a separate keyboard. I like the fact that the Chromebook’s keyboard is built in. I do a lot of writing, and find using an on-screen keyboard uncomfortable, and not as fast.

I’m no weakling, but why lug around a laptop that weighs a lot when you can enjoy pretty much the same functionality without all those extra pounds?

I keep my desktop computer pretty clean. I defrag it every week or so, and run a cleaner on it at least once a day. Even so, my routine now is to switch it on and then go and do something else, like make myself a cup of tea, while it’s grinding into life. It’s quick once it gets going, but getting going is where it’s slow.

The Chromebook, on the other hand, simply springs into life. Apparently, it takes 8 seconds. That’s impressive.

It uses the cloud

The Chromebook uses Google Docs by default, and stores everything in the cloud. Backup is therefore immediate and not even something you need to think about.

You can work offline too, which is handy for when you don’t have an internet connection.

What about school use?

As Jaime Casap told me, any mobile solution has to be scaleable, whether you’re talking about a single class set of 30, to a major campus of 30,000. The admin side of things is crucial, because teachers do not have the time or the inclination to sort it out. Management of any device has to be seamless and transparent as far as the teacher and pupil are concerned.

Casap informed me that all the admin is done in the cloud – another advantage if you think about it, because it means that the network manager can make changes during the school holidays, say, without even needing to come into school. That kind of facility also works well when severe whether prevents travel.

The network manager can, using domain rules, determine who gets access to what. As Casap says, it’s not about the device, it’s about the user experience.

As for viruses and other malware, that sort of thing is taken care of automatically, and in the background. Even operating system updates, which take place every six weeks, are something that nobody at the school has to worry about.

Well, Jaime would sing its praises, wouldn’t he? After all, his job title includes the word “Evangelist”. So what is like at the proverbial chalkface?

Bruno Reddy considered other mobile solutions, but has found that the Chromebook has everything he needs from an educational point of view. It has a keyboard, which is good for longer writing pieces, is robust enough to be subject to intensive use, and is easy to manage. Moreover, the battery lasts all day (8 to 10 hours), which is essential in a school setting, and the fast boot-up time means that kids aren’t tempted to mess around while they’re waiting.

Reddy makes use of all the Google Apps tools available, such as Google Presentation, Blogger, YouTube and others. Furthermore, he never requires technical support.

I realise that this article sounds like an advert for Chromebooks, but having tried it out for myself I think it is definitely worth considering. It does have some disadvantages when compared with a tablet. For example, using the camera facility to make a video on the move is a bit awkward because you have the keyboard part of the device to contend with.

Also, some of the great apps available for tablets aren’t available for the Chromebook. Mind you, there are plenty of others, and you may be able to find a substitute that works just as well as any apps you especially like.

As well as the good aspects already noted, though, is the price: on average around £200 for a device which includes access to all the software you’ll need.

Of course, there’s no law against having a “mixed economy”. That is to say, you could have tablets and Chromebooks available for staff and pupils to use, depending on what they want to use them for. But things to bear in mind if that sounds attractive are as follows.

First, how much capacity the technical support person or team has, because they will need to work with two different systems.

Second, where will stuff be saved? It’s an important question, because the cloud that, say, the iPad uses, and the one that Google uses, are not the same. It’s not an insuperable problem, but you will need protocols or a technical solution or both.

But as far as the device itself is concerned, the Chromebook is ideal for use in schools.

This article was first published in Digital Education.