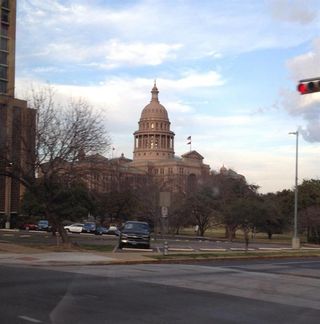 To kick off our first day of reporting at SXSWedu, I attended Tearing Down the Walls: Giving Students Agency led by Heather Staker from the Clayton Christensen Institute and Dr. Jennifer Keys Adair from the University of Texas. Going into the session I hoped to learn more about the broad idea of allowing students more agency in the classroom, which as a student is something I enjoy in my own education.

Adair started the conversation by sharing videos from her study of students being given more than typical agency in their activities and asked session participants to consider when they, as adults, would have typically intervened. Participants spoke about intervening when the activities looked potentially dangerous (waving or swinging items, pretending they were weapons, etc.) or aimless and distracted.

As Adair pointed out to session participants, though, it is after many of these moments that students began showing interest in drawing or writing about what they are learning. And yes, upon a second viewing, that is exactly what happened.

After watching the videos, Adair and Staker began to interact with participants and went into a few main points: what agency can look like in a classroom, the benefits and challenges of agency and the current and future state of agency in classrooms nationwide and abroad. To begin the discussion, Adair defined student agency as “the ability to influence how and what they learn so that they can expand their capabilities.” A teacher that gives students agency within their classroom encourages students to learn about what they’re really interested in, whether that’s frogs, volcanoes or something entirely unique.

One of the questions the speakers posed to the teachers, innovators, entrepreneurs, etc. that filled the room is what we stand to gain or lose from the “sage on the stage” model of teaching versus more student-directed learning that encourages student agency. Only one hand in the room, which was standing room-only just ten minutes after the session began, agreed there is something major to be lost if we left the generally-accepted “sage on the stage” teaching model. Session participants then suggested other models that could work better, like teachers acting as mentors or group facilitators to better their students’ educational experiences.

As the dialogue continued, it became clear that most of the educators in the room agreed with the concept of student agency but had trouble implementing it in their classrooms due to cautious administrators and state-mandated learning standards among other issues. However, the positive effects of agency in the classroom (when it’s possible for it to be implemented) were stressed throughout the session.

After the session, I got the chance to speak one-on-one with Adair and Staker to ask a few questions about how they think studeny agency can be incorporated into a curriculum (particularly in high school classrooms) and combined with technology to create more engaging classrooms.

Adair said that in an age when many high school students use Google and other online platforms to find information, teachers should encourage their students to utilize this technology. But when students are in the classroom, teachers can help them synthesize and analyze all of this information to weed out what’s true and what’s the most important content about a certain topic.

Adair and Staker were both confident that there are many ways to give students agency in the classroom, whether that involves technology or not. Based on the dialogue between participants in Adair and Staker’s session, I think student agency in the classroom has become a hot-button issue that many educators want to see more of in our classrooms. But others still struggle with it, as did one session participant who had this to say: “It’s hard to give students agency if you yourself don’t have agency.”

Logan Kramer is sophomore at the Liberal Arts and Science Academy (LASA) in the Austin Independent School District. She is attending and reporting on SXSWedu as one of Compass Learning’s student correspondents. Reach her at @logan_kramer.