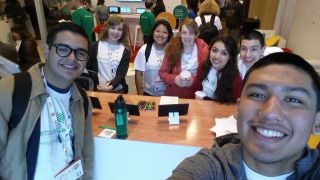 When we first got to SXSWedu, we headed straight for the Google lounge to check out all the different Chromebook devices (above: students from Del Valle High School at SXSWedu). The Google lounge is super colorful with Chromebooks on display everywhere. There was a station for coffee and tea along with a variety of free snacks. We met one of the head guys at Google lounge, who told us his opinion on which Chromebook he thinks is the best for classroom use.

In our experiences, we believe that teachers do need to be taught how to teach with more 21st century techniques. Many teachers refuse to use new technology in their teachings, and that can affect how the students are actually learning. A lot of students like to learn with technology because they’ve grown up surrounded by technology their whole lives, and they’re more comfortable with it. Teachers shouldn’t be afraid to use more technology because it’s for the benefit of their students. Teachers often think their students will overpower them with their knowledge of technology, and they probably don’t want to want to feel like their students are smarter than them. Teachers who feel like that should realize that their students will actually appreciate their attempt to try to use more technology and will be more motivated to learn.

Brianna Rodriguez and Joaquin Duran are juniors at Del Valle High School in the Del Valle Independent School District. They are attending and reporting on SXSWedu as Compass Learning’s student correspondents.