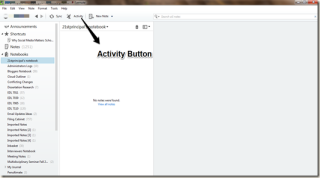 Have you been receiving the message “Sync failed due to error on client side” when your desktop Evernote application fails to sync? While it does not stop the other files from syncing, receiving message over time is annoying. It is most likely due to one note that is causing a conflict with the desktop and web versions of the software. The fix is relatively easy, though I discovered after uninstalling and re-installing the Evernote desktop client.

1. First locate the note that is causing the sync failure. You can’t do this directly, but you can indirectly. If you click on the “Activity” button at the top of the Evernote desktop application, a list of recent activity appears. Look for “sync errors” in that list. It will indicate which note has had a sync error.

3. Once export has been done, delete the note with the sync error from the Evernote notebook. Sync your Evernote desktop app by clicking on the “Sync button.

4. Import the deleted note back into your Evernote desktop application by selecting the import function under file. Re-sync your account and all should work.