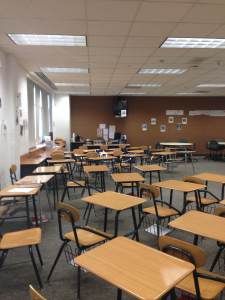 5/25 Update: Still waiting to hear back from Kickstarter. Anyone suggest any Kickstarter alternatives?

5/13 Update: We’ve been denied by Kickstarter. We’ve filed an appeal.

This year, I asked my students what skills they think they would need to be successful in the 21st century workplace. They said things like perseverance, collaboration, hustle, being personable, being tech savvy, and strong, asynchronous communication. I then showed them pictures of 21st century workspaces and explained how they were designed to foster those skills. They were in awe. I mean, do a GIS for Google workspace. Who wouldn’t want to work in a place like that?

We do a ton of collaboration in my class, so I was happy to see many of them appreciated the collaborative working environment that many companies embraced, too. “Collaboration will be expected of us in the real world,” I remember one student saying. They liked that companies encouraged people to work together, take breaks together, eat together, and play together. “Everything seems to be about making people happy and having them work together.” Students decided that these companies are so successful because they invest in their employees and treat them like people. “People want to be there and I doubt anyone quits.”

I agreed with them.

“Why can’t our classroom be like that,” they asked?

Fast forward to March. I was invited to Schoology HQ to show them how I use their LMS in my classroom and tell them why they were making such a huge difference in my students’ learning. I used Schoology and Twitter to keep my students in the loop as to what I was doing while I was there and to show them the pictures of Schoology’s office like they requested. Because, as my kids accurately predicted, Schoology has the kind of working environment my student’s fantasized about earlier in the school year; the kind of environment they want to learn in.

They saw pictures of the glass-walled collaboration areas, the open-air work space, the bright colored walls, and the different types of chairs workers chose to sit (or not) in. They were blown away by the pool table, the video game theater, and the idea that one can actually work and play at the same time. When I told them the vending machines in the kitchen were free and everyone stopped and had lunch together (even the bosses) like a big ol’ family, their jaws dropped.

I don’t blame them. Like them, I’d only seen pictures of 21st century workspaces. Schoology was the first time I was actually in one. The the thing that impressed me most about my visit to Schoology was how happy everyone was and the passion with which they worked. They believe in what they are doing and, more importantly, why they are doing it. Purpose. I talked to a lot of people while I was at Schoology. From the front line folks, to the Devs working in the back, to the founders themselves; they were all happy to be doing what they were doing. Their workspace definitely supported that.

My formal visit should have lasted a few hours, but as I started to wrap up I was pulled here and there by many an employee who wanted to show me their pet project or get my thoughts on an idea they had. I was at Schoology for twelves hours, and the time flew by. I loved every minute of my visit.

I let them brainstorm and research what the 21st century workspace would look like in the classroom. We bounced ideas around the room until we settled on a few things: 1) the desks they sit it in make it hard to collaborate and move around the room. 2) In their ninety-minute learning block, as part of their six-hour learning day, they get tired of sitting all the time. 3) The lack of technology in the classroom (four computers from 2002 for thirty kids) hurts collaboration and might even be an impediment to their success, for how were they suppose to develop 21st century tech skills if they don’t use them often?

The solutions, they said? Since our school is transitioning to GAFE and they love Drive, they wanted Chromebooks. For more comfortable, mobile seating they wanted a desk with wheels, and a couple Pub-like tables so they can stand and collaborate or even take notes (they really loved the idea of standing and taking notes).

Next, students asked me to send out e-mails on their behalf (since they said my school email address would look more official) to some education furniture companies and Google’s Chromebook team to see what their best price would be for a class set of their products. As they waited for responses, they settled on using Kickstarter to raise the money. They thought it was a cool website and wanted to try to raise the funds there since it mirrored what they may have to do in the 21st century workplace.

Thus began my moral dilemma: I wasn’t sure if Kickstarter was the best place to try and get funding. I suggested more traditional ways classes raise money. My kids shot me down. My kids were adamant about crowdfunding because they said those companies they learned about don’t have bake sales and car washes when they need to raise funds. It seemed their 21st century workspace had become serious business.

We looked at other Kickstarter projects and didn’t see any like ours. Some close, but none exactly like ours. Kickstarter is for projects I said. Is this 21st century workspace a project? They said yes, but I had them check out other options anyway. When we looked into other crowdfunding sites like donorschoose.org and Indiegogo, I realized their was no perfect place for us to try to raise the funds. I have to admit, that surprised me and gave me my own driving question:

My district is a CD factor group, recently impacted by Hurricane Sandy, and has the logistics of the online PARCC test to prepare for. The things my students wanted (deserved?) were likely to never be in the budget. We have the same old desks as everyone else and a couple of old computers I Flight-of-the-Phoenix’ed out of broken computers my school was getting rid of, which is more than some classes have, but, like any good teacher, I want the best for my kids. I want them to have the best, so they can be the best. Why can’t we have nice things?

In this, my kids actually taught me something when they said, “well, what’s the worse that can happen? Kickstarter shuts us down, says ‘no,’ or we fail. Big Deal.” I have to say, I was proud of their attitude and I bought in. A Kickstarter we would make…

and fail we did. Google never got back to us no matter how hard we tried, nor would any educational furniture company help us. It’s like no one wants to take our money…. This part of our project was (and still is) in limbo. We still haven’t found anyone who wanted to work with us.

Undeterred, we brought equipment in from home and filmed an amazing video for our Kickstarter. We considered our audience and decided the video needed to be funny and a bit nostalgic, but also seriously address the concerns we had about the classroom we worked in. It also had to have the potential to go Viral.

While filming the video, my kids came to a sudden realization: if their Kickstarter is successful, the classroom wouldn’t be ready until next year. They wouldn’t get to work in the 21st century classroom they wanted to create. Once they made peace with the fact that I couldn’t follow them up into Junior year, the tone of the project changed.

The 21st century workspace was no longer for them, but for me and the kids who come after them. “Imagine how much more we could have done if the classroom didn’t hold us back!”

Originally, this post was going to be about the importance of a classroom’s learning environment, and I will write about that one day, but as I sit here and think about this project and why my students did it, I can’t help but be proud of them. We’ve done project and Problem-based Learning all year, but this is the first time my students have ever put it to use in a real-world, organic context. It was real-life PBL in action! The problem: their classroom, like most classrooms, sucks. But instead of complaining, they set out to do something about it; 75 students, spread over three periods, banded together to do something about their problem. I took a back seat and helped where I could.

This has been one of my favorite teaching experiences. It was a lot of fun to weave this project into our daily learning and it was awesome to share the finished project with people and tell them, “Yeah, my kids made that.”

The Kickstarter is complete and currently under review. If it is accepted, and you want to donate to the Kickstarter, that would be awesome. My kids and I would be thrilled, but even if you don’t, even if this Kickstarter fails, I know that they have learned something and I’ve seen real-life Problem-based Learning in action.