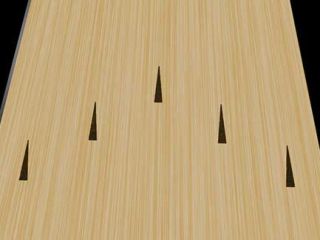 When I was a kid we used to go bowling. No, not Wii bowling. Actual bowling. You know, where you wear someone else’s shoes, put your fingers in some greasy ball and take in your share of second-hand smoke? (smoking was allowed in bowling alleys back then). When I first started out, my ball went all over the place, including backwards once into a group of bystanders. When I finally did get my sense of direction down, I would end up chucking this 10 pound ball down a lane and inevitably it would end up in the gutter. Time and time again I would try only to be met with the “Brunswick pin sweeper of shame”. You know, the one where that rake comes down and knocks over all ten pins that you missed?

My parents were great at letting me fail and learning from that failure, but it led to some frustration. Enter bumper rails! While I still had to have some basic sense of direction, the bumper rails kept my ball from falling into the gutter and I was able to achieve some moderate success and even come up with the occasional strike.

Rolling out iPads in our schools in some ways as mirrored my bowling experience as a youth. We’ve given some basic direction and support but sometimes the ball flew backward (like when we went from iOS 4.3 to 5.0). Sometimes our fingers get stuck in the ball (iPads only being used for simple substitutive tasks). And other times, even when we had students going in the right direction, their feet would sometimes step over the line before they roll(distraction). However, by constantly communicating with our community, teachers, students and administrators, we are continually seeking out ways to positively impact the instructional use of these tools in the classroom and thus have the kids bowl more strikes. One of the early struggles in our deployment was the ability to be balance profiles and restrictions on the iPads so that they would have a successful educational experience. We really only had a couple of choices when we started back in 2011:

A) Let the kids bowl down the lane with the possibility of the occasional gutter ball or B) Set up blanket restrictions which was similar to bowling a ball down the lane only to have the pin sweep come down and block the pins, essentially taking away any of the creative personalization opportunities of the iPads.

Finally, this summer, we were able to use our own set of bumper rails. With the new Apple Deployment system and our revamped Casper JAMF MDM system, we were able to put some better, more secure profiles and systems in place to help further the instructional focus of iPads in the classroom and let creativity flourish.

Here’s a poster of a few of our newest restriction profiles at each level:

These new profiles will help us not only deal with our greatest challenges of the past but also help us push out apps wirelessly to student iPads at a much more rapid rate with an eye on personalizing each students’ device. Here are three things we’re most excited about in the new system:

Casper Focus on a lane

Locked in “Focus” when needed:

With the new Casper Focus tool, teachers can lock student iPads into a single app. This means that we can use the iPads for testing and even as a substitute for expensive calculators. While we don’t want teachers over-using this feature, it will give them some scope of control when needed to get the class re-focused and on the same page so to speak. (like those directional arrows in the bowling lane)

We are highly concerned that non-educational gaming and iMessages were causing some disruptions to learning and causing kids to be off-task or distracted during the school day or at night. With our new MDM update, we have removed iMessages from the devices entirely and also improved some of the restrictions for gaming. We still believe it takes a village with a team approach of parent and school to teach kids self-control, but this new system gives us the guidelines (Bumpers) we need to make that happen effectively. One student found this out when he tried to turn in his iPad after getting it this Fall and claiming that it was broken. When he was asked why he thought it was broken he said, “Because I can’t download my favorite game. It just keeps disappearing.” (Strike!)

Over the Air App Distribution:

At the secondary level, students could get apps from us via a web-clip called “Self Service.” This was a nice way to make apps available for students, but it meant essentially giving away the app as a consumable because once it was redeemed, the student owned it. With the updated MDM system and the new Apple ID Under 13 program, students K-12 can have apps “pushed” to their iPads over the air without going and looking for them. By that same token, the apps now act as licenses which can be “pulled” back whenever a student leaves or starts a different course (Think rapid ball return and pin set-ups)

While we are always working to make personalized learning the perfect blend of support (bumpers) and guidance (arrows) which will turn learning into a success (strikes). With these new additions, I think we are well on our way to bowling a perfect 300 when it comes to iPads in Education.

Now…if I could just improve my personal bowling score…Am I too old to play with bumpers?