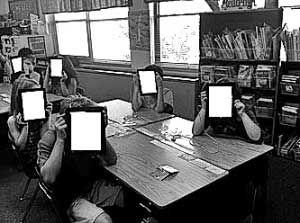 Last night, I had the opportunity to present in front of our School Board on the state of technology in our district. We reflected on the first three years of our LEAP initiative that brought 1:1 iPads to hands of every student at Eanes ISD. We talked about successes and we talked about mistakes and how we’ve fixed them. While we are still far from where we would like to be, I am blessed to have such a supportive staff, community and board that have helped make this program a success. In the coming months there will be discussions about what to do with future technology funding. While I made a strong case to continue the program, we know it costs money and that money has to come from somewhere.

As I slept last night, a vision came to me in the form of a dream. It was a vision of an alternate universe that would have been my life and the life of this school district if we decided in 2011 not to pilot this innovative idea of 1:1 iPads.

In this dream my life was pretty boring. I was doing a lot of training on PowerPoint. We were constantly struggling to buy enough digital cameras for classes. My budget was getting burned up on licensing Adobe software for film-producing and photo-editing. But as boring as my life was, it was worse for kids.

As I visited classrooms, there was no technology except for the A/V equipment and the teacher’s desktop. The computer labs were still there, but they were now 7-8 year old machines that barely worked. Teachers fought for 45-minute time periods in the lab when they could, but ultimately, many decided it was better not to even go. We had mobile technology in the form of netbooks (maybe this was more of a nightmare than a dream) that were really nothing more than expensive paper weights.

When I woke up this morning, the dream/nightmare stuck with me. I started thinking…what if we didn’t go 1:1? What if we took the easy way out? What would be different? What would be lost? Here’s just a few things that came to mind:

When we first bought the iPads, the common perception was these were solely consumptive devices. You could read books with them and that was about it. I couldn’t disagree more. I’ve seen students creating amazing works of art, publish books and produce movies because they had the power to do all of that at their fingertips. One very creative example came from Westlake High School Student Michael Bartmess. He was in need of an app to help himself and classmates with ASL finger spelling. When he couldn’t find one in the App Store, he decided to make his own. Where would his motivation to create this have come from without these devices? In this alternate universe, his app wouldn’t exist and thousands of kids would struggle with finger spelling in ASL classes around the world.

The library would just be a library

One of the most inspirational spaces in our district is the “Juice Bar” at Westlake High School. It’s a unique mix of Starbucks cafe and Apple Genius bar all-in-one. Digital librarian Carolyn Foote’s vision for this space was transformative and ahead of its time. It provides students with a place to plan, collaborate and troubleshoot. In the world without 1:1, this area of the library would just be a sleepy corner that exists for 10-year old reference books to collect dust.

The iVengers would just be computer lab teachers

I am blessed with the best team of Educational Technologists on the planet (a.k.a. the “iVengers”). In a 1:1 environment, the role of a Ed Tech as technology integrator is vital to success. Prior to our 1:1, this position was based primarily in a computer lab (because that’s where the technology was) and was centered mainly around delivering 45-minute lessons once a week. Now they are truly coaches working to collaborate, co-teach, and design lessons with teachers in the classrooms. In this alternate world, I think this position and the highly successful rock-stars holding the Ed Tech title would be long gone from this district and our teachers and students would suffer as a result.

Sir Ken at iPadpalooza in 2013

A Global Learning Festival Would Not Exist

iPadpalooza was born out of the idea that we need to gather as a group and share our successes. While it’s turned into a global event, at it’s core it’s still based on that idea that learning and sharing can be engaging and fun. In my bizarro world, this festival wouldn’t exist and the thousands that attended would have missed the inspiring words of a Sir Ken Robinson, the creative madness of a Kevin Honeycutt, and the thought-provoking questions of Sugata Mitra and the creative conversations amongst colleagues. After all, who would want to attend “Netbook-a-palooza?”

Parents would be in the dark about digital footprints

Having a 1:1 means having continual and ongoing conversations with parents about their role in the lives of our digital kids. I’ve spent hundreds of hours talking with parents, working with parents, and now teaching parents online about what it means to raise a kid in the 21st century. While I’d like to think that would have happened regardless of our 1:1, the reality is, in a world where every kid doesn’t have a device, what is the motivation for a district to support parents in this realm? We blurred the line between school and home, so we need to be the ones helping in both fronts. Without this initiative, the parents of our 8000 students would be left on their own to figure out how to navigate the world of social media, how to balance screen time, and how to help their children build a positive digital footprint for themselves.

There would be a few less trees in the world

We are far from a paperless district. However, we have more and more content being moved digitally across our network then ever before. Pulling up our Google Drive stats today reveals that we have have more than 170,000 files, docs, sheets, and forms that have been uploaded or created digitally since 2011. Moreover, we just had our 50,000th document shared. That’s a lot of collaboration that doesn’t take place if everyone doesn’t have a device. If you take into account that many of those files would have likely been photo-copied and distributed and that a typical tree is made of about 80,000 pieces of paper, think about how many trees would not be here now if we said “no” way back when?

Students’ voices would be muted

Blank screens instead of blank stares

While it’s nice to save paper, create an app, redesign a library and connect with community, this one to me is the most important. Students that are trusted with a device are also empowered. Traditional schooling exists to teach kids how to answer questions rather than ask them. Empowered students can amaze the world and we’ve been lucky enough to have multiple examples of this over and over again in our 1:1. From an entire class of 3rd graders becoming published authors in the iBook Store to a student creating an entire website to help her nephew with his illness, when you give students an opportunity to express themselves, you’ll be amazed at what they produce.

In this no-student-device universe, their voices might not be heard. A universe like that means that a teacher’s job might be a little easier because they don’t have to change anything about their practice. It means a parent doesn’t have to even think about what their child is putting on-line. It means that administrators don’t have to wrestle with Apple IDs or filters or restrictions. It makes the lives of all of those people a little more easier and a little more boring. But who are we forgetting in that scenario?

They are the reason schools exist, not the other way around. We need to do everything we can to prepare them for an uncertain future and that means NOT taking the easy way out.

For me, it means never resting until that becomes a full-fledged reality for this world.

But in reality, why do I need to sleep when I’m already living the dream?

Carl Hooker is the director of innovation & digital learning at Eanes ISD in Texas. Read more at Hooked on Innovation.