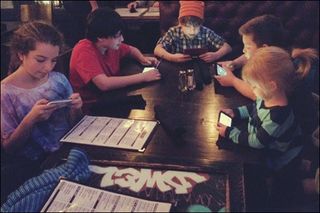 There’s nothing the press likes better than a story that generates real panic for teachers and parents…especially when it has the stamp of science to give a the panic an extra edge.

That’s exactly what happened when the media (Scientific American, Wall Street Journal,CNN,New York Times) ran a story about the American Association of Pediatrics (AAP)recommendations on children and screen time. One to two hours a day for children older than 2, they said, and no screen time at all for those younger than 2. Longer than that is dangerous to their health and their development.

An educator or parent today reading this probably had one of these reactions:

1. You are a failure because your students are in front of screens much more than 1 or 2 hours a day.
2. You don’t let students use computers so you’re good.
OR
3. Seriously? What year is this? Who is doing this research?

If you fit into the third reaction, you are likely someone who has seen amazing learning from screen time for your young people: building, creating, coding, reading, writing, and more.

Why would adults want to limit that?

So why would the AAP make such out-of-touch recommendations?

This year Dimitri Christakis, AAP Council on Communication and Media member, revealed new information about the recommendations. He confessed to the research that lead to the recommendations was conducted before anyone knew the iPad, or similar interactive screen devices, existed

While his view on television time stands, he says that since screens are now more than just devices to passively intake information, he has a different view. He explains that today, screens “can be used to read books to children, and high-quality apps are similar to toys. Therefore, the AAP needs to consider how these devices are used instead of discouraging their use across the board. We don't want to risk appearing so out of touch that we're irrelevant and people won't take our advice seriously."

Unfortunately, that’s already happened. As those who read the recommendations will notice, they are right out of the 20th century squarely focused on passive television viewing and simple video games.

American Association of Pediatrics aren't the only ones on the wrong track.

UCLA scientists found that sixth-graders who went five days without even glancing at a smartphone, television or other digital screen did substantially better at reading human emotions than sixth-graders from the same school who continued to spend hours each day looking at their electronic devices.

They had one group of kids go off to a nature camp interacting for five days. The other group of kids spent life as a they usually would.

Because the nature kids read emotions better, researchers jumped to the conclusion that the culprit was screentime. It’s more likely that the most important factor was that the kids were in an engaging outdoor environment, interacting and learning together, a circumstance that doesn’t often happen within the walls of schools.

So, are screens really the culprit or do we need to give kids more time together, outdoors? Brain researcher John Medena has found that that activity, movement, and exercise is crucial for boosting brain power. But the two don’t have to be mutually exclusive. Outdoors and tech can go certainly go hand and hand. There are amazing apps (like this one) to help identify species of plants and animals. Young people like “Animal Austin” are bringing their phones out on an adventure, to capture their learning via video that they can share with the world to learn nature facts.

And while it is important to read a person’s facial signs, in today’s world it is just as important for youth to become savvy in the nature of this new language: understanding and conveying expression in online communication.

Some common sense advice comes to us from Zero to Three, a nonprofit research organization focused on infants, toddlers and their families. They recently (2014) publishedScreen Sense: Setting the Record Straight. Finally, research that acknowledges not all screen time is the same. Their advice: Screen time is most effective when adults and children use electronic devices together. This interaction will prepare young people to effectively use the devices as toddlers, then in school and beyond.