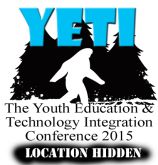 A meeting “grotto” at YETI

This year’s event took place at the gorgeous [omitted] over a mild, partly cloudy weekend. Due to the natural terrain and the landscape of the area, no rooms were needed. Many of the natural grottoes acted as small meeting rooms and the larger caves served as auditoriums. The acoustics were incredible and because of the location being near the equator, cell carriers signals were amplified along the walls giving attendees incredible 5G WiFi connections.

One of the most incredible parts of this event are the absolutely ridiculous variety of speakers and educators they have on hand. I attended a session that was an actual a hologram of Bill Gates speaking to Jaime Escalante. Some sessions lasted only for only a few minutes and others, like Bill Nye’s lengthy monologue, lasted several hours.

I was asked to be on a panel discussing the legitimacy behind this new wearable idea called a “thoughtband.” The concept is simple. Wearing a piece of technology on their foreheads like a Bill Walton headband, students’ thoughts are displayed in scrolling LED fashion. Before we were even able to get into the discussion about data-mining or mind-mining for that matter, someone (who looked like a famous politician) got up and banged the gong, thus ending our session. I wish I knew what he was thinking…

Nothing is normal at YETI, including the keynote. This year’s closing keynote session started at midnight and lasted until the sun began to rise. The closing keynote was delivered by noted scholar and thespian Jon Lovitz. His message of prosperity, educational equality and the need for more 80’s rap music in education rang true with the crowd of thousands. Following his talk, he asked the crowd to initiate in an awkward flash-mob edu-rave of sorts. With the 80’s band Baltimora playing their one-hit wonder “Tarzan Boy” in the background, the attendees went into a sort of strange crowd-surfing/internet-surfing mosh pit of sorts. Culminating in one of the strangest multi-tasking activities I’ve ever witnessed as attendees danced and texted on their smartphones, responding digitally to YETI’s essential question for 2015: Will the wearable flip-flop change the foot of education?

Alas, all good things must come to an end, and unfortunately, my violation of one of YETI’s 7 tenets of attendance (though shalt not video-record) caused my immediate removal before the end of the event. Organizers wiped the video off my phone, but I was able to sneak back over a hill and capture about 11 seconds of the closing coronation where they named one attendee the Patron Saint of YETI15.

While I may risk prosecution or worse yet, not be invited back, I’m making this video public in the hopes that the rest of the world will have a chance to experience just a little taste of what I got to experience. Enjoy: