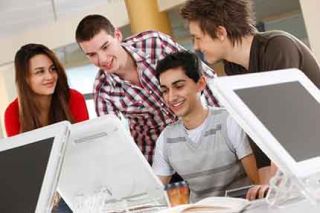 [Our book Building School 2.0 will be released in one week! Pre-order it today!]

My copies of the book that Zac Chase and I wrote arrived today. Not the PDF proof… not the galley print… but the thing. The actual book.

It is an incredible feeling — to hold a book you wrote in your hand. And it actually caught me by surprise how meaningful the moment felt. I mean, I’ve been showing people the galleys for a few months now… it’s been on Kindle for a few weeks… but this is the real thing. It’s really going to happen. People will be able to go into a bookstore and buy the thing that Zac and I created.

And as I was holding it, I thought back to the first time I met Larry Rosenstock of High Tech High. It was during the planning year of SLA, and he gave me a copy of the book that his students published that year. The pride and excitement he had about what his students created was palpable and inspiring. And I don’t think I fully got it then – what it meant that his kids had created something powerful and of value that was real in the world.

Over the last ten years at Science Leadership Academy, I’ve seen kids build, make, create and do in incredible ways. I’ve seen kids take incredible — and justifiable — pride in what they’ve done. It’s an incredible thing… to see people get such obvious pleasure and pride from creating something that they are proud of… that is uniquely theirs (even, yes, when it’s a group project.) And sometimes, it’s easy to forget that feeling… to forget why it’s so important to make sure that we just don’t “do projects” in school, but instead we create the conditions by which our kids can do real work that matters to the world.

I hope people read the book Zac and I wrote. I hope educators and parents sit down and talk about it together. I hope it helps people who care deeply about students and school to evolve their institutions in powerful ways. And today, I held this project I did in my hand, and I felt that sense of excitement that this thing my friend and I did together might just make a difference in the world. And I want every kid at SLA – and beyond – to know that feeling… to know that they can do real work in the world that matters. I want every student to have that moment of accomplishment of seeing a project through to completion, but more importantly, I want them to have that feeling of knowing that finishing the project is actually just the beginning.

Chris Lehmann is the founding principal of the Science Leadership Academy, a progressive science and technology high school in Philadelphia, PA. that was recognized by Ladies Home Journal as one of the Ten Most Amazing Schools in the US and was recognized as an Apple Distinguished School in 2009 and 2010. Chris was a 2014 winner of the Harold W. McGraw Jr. Prize in Education and has been honored by the White House as a Champion of Change for his work in education reform. In June 2010, Chris was named as one of the “30 Most Influential People in EdTech” by Technology & Learning Magazine. Read more at his blog, http://practicaltheory.org/blog.