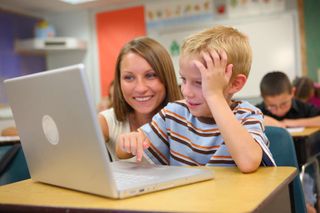 In my experience, boys are often more reluctant than girls to dig into writing assignments. This is in part because boys entering school sometimes don’t have the same skill level girls do: according to recent data from the UK Department for Education, 63.6% of five-year-old boys reached at least the expected level in writing, compared with 78.3% of girls.

Game-based learning has been very effective in engaging all pupils, especially boys, and providing a deep and meaningful stimulus for writing. The fact that they can have a direct impact on the game leads to a greater engagement. Here are a few ways to inspire boys—and all reluctant writers—to get started.

1) Start with a familiar context: For a recent project at Lanesfield Primary School, teachers Jo Sutherland and Claire Noakes used the video for the song “Titanium” as inspiration. The video had an instantly recognizable song which hooked the children from the start. It began with dramatic scenes that enabled the children to fully explore the importance of setting description. The school setting was something that they could associate with and compare to our own. In addition to this, there was an element of suspense which allowed the children to explore different outcomes.

2) Expand the audience beyond the teacher: Another part of boys’ reluctance to write has to do with audience. They can be less engaged when they’re writing only for their teacher. To give them a chance to compete and collaborate to build a memorable writing experience, we used a free online writing platform BoomWriter, which gave us the goal of writing the chapters of a book that every student would get a copy of. We encouraged shared writing sessions with mixed genders to develop ideas for writing. Mixed groups inspired each student to focus and see things from a different perspective. It also allowed pupils to concentrate better by working with people outside their normal friendship group.

3) Spark their competitive fire: We began the project with a “story start” written by Mark Smith, the citizenship, language and learning team leader at Wolverhampton City Council, to inspire students. Then each student wrote what they thought should be the next chapter, and as a class we voted anonymously on which one was the best. We wrote three chapters this way, and the winning chapters got printed in the book. The competitive aspect of BoomWriter inspired all the children, including some of the more reluctant writers, who often happen to be boys.

This year, our students also took part in The Writing Bee 2018, an online competition that pitted them against America students, which certainly added to the engagement levels! Boys were especially excited about The Writing Bee because the story start for the competition was written by Jeff Kinney, who they all knew from Diary of a Wimpy Kid books.

4) Enrich the experience with multimedia: As part of the “Titanium” project, we produced an “audio dramatization” that enabled the children to see a different end product to their writing. Currently, audiobooks are becoming as popular as hardbacks or paperbacks, and this extension to the project allowed the children to see the full marketing potential of their creative work. They investigated how sound effects added to the atmosphere of the story, along with the technical knowledge required to make a podcast—which is an effective piece of work in its own right.

We also offered students a range of visual literacy resources from The Literacy Shed. Using exciting visuals alongside high-quality texts to support writing helps engage all reluctant writers, especially boys. The visuals provide a structure for the writing so students can focus on developing interesting vocabulary choices and sentence structures as opposed to having to plan out an idea or scenario from scratch.

Some students will always be reluctant to express themselves, but the combination of visual media and structured writing, aided by teacher-written model texts, allowed our students to explore the creative side of writing while having the stability of scaffolding. Interest, support, and imagination combined to produce some outstanding pieces of writing.

Russell Newman is the learning technologies consultant for the Wolverhampton City Council. Follow him on Twitter: @LTTonline.